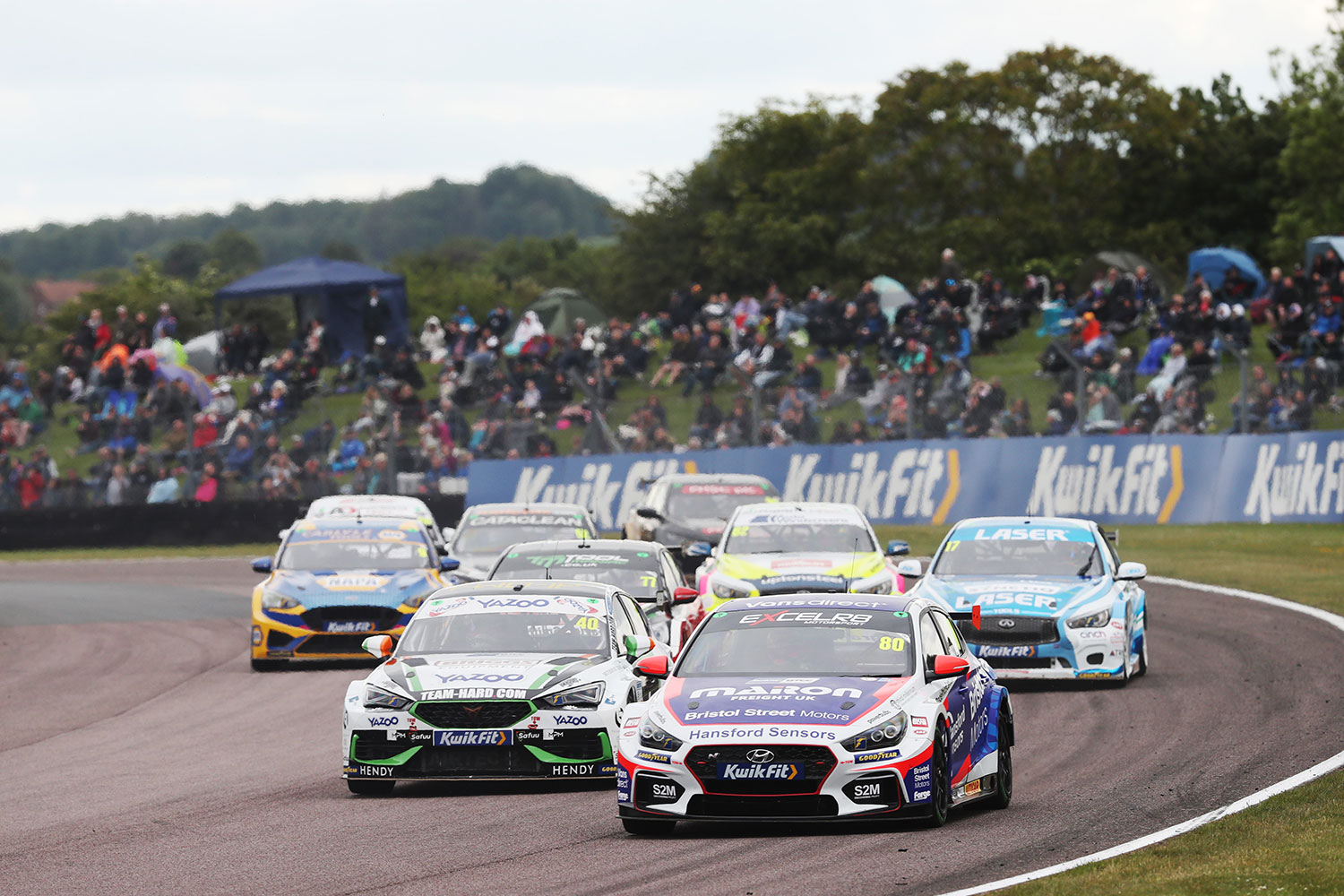 In the British Touring Car Championship, title bids are built upon making the best out of your bad days – and after somebody else’s ‘moment’ severely compromised his challenge at Thruxton yesterday (29 May), Tom Ingram dug deep indeed to salvage a brace of top eight finishes courtesy of a characteristically gritty display.

Arriving at Thruxton – the fastest circuit in the country – at the top of the points table, Ingram had to contend with no hybrid deployment in qualifying as a penalty for his early-season success. A stellar effort saw him sitting pretty in fourth position for a while, but despite hustling his Hyundai i30N around the lap in his trademark hard-charging style – extracting every last millisecond of performance from the car – he was ultimately powerless to prevent himself from slipping down the order to eighth amongst the 29 high-calibre protagonists.

That nonetheless represented a very solid outcome given his handicap, and the data confirmed that the majority of his time loss was in the final sector of the lap, where hybrid ‘boost’ is most effective exiting the slow-speed chicane.

Vowing to go on the offensive in front of the live ITV4 television cameras the following day, the Bristol Street Motors with EXCELR8 TradePriceCars.com star gained a spot to seventh on the opening tour of race one and looked poised to pick up a couple more as the field concertinaed together heading through Segrave.

Unfortunately, in a classic case of ‘wrong place, wrong time’, he was then caught up as collateral damage in a collision between two of his rivals, sending him skating across the grass at Noble and obliging a visit to the pits to remove grass from his Hyundai’s radiator.

A super-quick extraction job by the EXCELR8 crew enabled Ingram to rejoin the fray without dropping a lap – albeit more than half-a-minute behind the rest of the pack. Thereafter, he was consistently the fastest driver on-track but with just six laps of hybrid use available to him and no further incidents or safety car interventions to close the field up, 21st position was as good as it would get at the chequered flag.

In race two, by contrast, the double BTCC Independents’ Champion had the full complement of hybrid power at his disposal for only the second time all season – and he made excellent use of it. Despite there being none of the usual dramas ahead to take advantage of, Ingram was into the points by the end of lap three, with his i30N dancing right on the ragged edge of adhesion as he flung it around with brio.

Pulling off a succession of brave, ultra-committed passes around the quickest part of the circuit, he continued to move forward throughout, with a stunning switchback manoeuvre at Church on the last lap elevating him to eighth – an impressive 13-place gain on his starting slot in the UK’s premier motor racing series.

After narrowly missing out on the reversed grid pole position, the talented Bucks-born ace knew he would have to do things the hard way again in the day’s finale, with a lot of very quick drivers in front of him. Having neatly despatched Jake Hill, he advanced to sixth when Jason Plato made a mistake but Josh Cook – winner of the day’s previous two contests – would prove to be the immovable object to his irresistible force, stopping his progress firmly in its tracks.

Remaining glued to the Honda’s rear bumper throughout, Ingram crossed the finish line sixth, snaring an extra point for setting the race’s fastest lap. That leaves the 28-year-old fourth in the standings heading next to Oulton Park on 11/12 June, only five points adrift of second place.

“I made a good start in race one and was in a nice position going into the Complex. When I got the cutback on the exit, I thought, ‘this is going to gain me a few places’, but then Dan [Cammish] was hit and I was merely a passenger. I had nowhere to go but to take to the grass, which completely blocked my radiator and with the water temperature rising, we had to pit.

“It was just one of those annoying first lap bunching incidents that happen sometimes in touring cars, and what was even more frustrating was that our pace afterwards was so good – the Hyundai was really well-balanced and felt fantastic.

“From there, race two was all about making the best out of a bad situation. Having lost a big chunk of points earlier on, we had no choice but to be aggressive; of course we still needed to stay out of trouble, but at the same time we had to get back in the mix, so I knew I would have to conjure up a ‘Tom Ingram of old’ fightback.

“Along the way, we unfortunately picked up some damage when I got hit at the chicane, which knocked the tracking out by more than 20mm. That made the car quite lively to drive, and trying to turn into some of the high-speed corners was pretty terrifying, to be honest; we were actually lucky to finish at all, let alone come through the field as far as we did, which was great.

“Then in the last race, as soon as I got up behind Josh [Cook], I was stuck in his dirty air, which has a bigger effect around Thruxton than anywhere else. In that situation, you simply lose all front-end performance and wear your tyres out more quickly – it’s a vicious circle.

“Looking ahead now to Oulton Park, we certainly need to make up some ground. I’ve had pretty rubbish luck there over the years – something always seems to go wrong, and it’s the one track where I’ve never been on the podium in the BTCC – but hopefully we can turn that around this season. Qualifying will be key as overtaking there isn’t easy, and with a little bit more hybrid deployment at our disposal, perhaps no longer leading the championship might turn out to be a blessing in disguise. We shall see…”