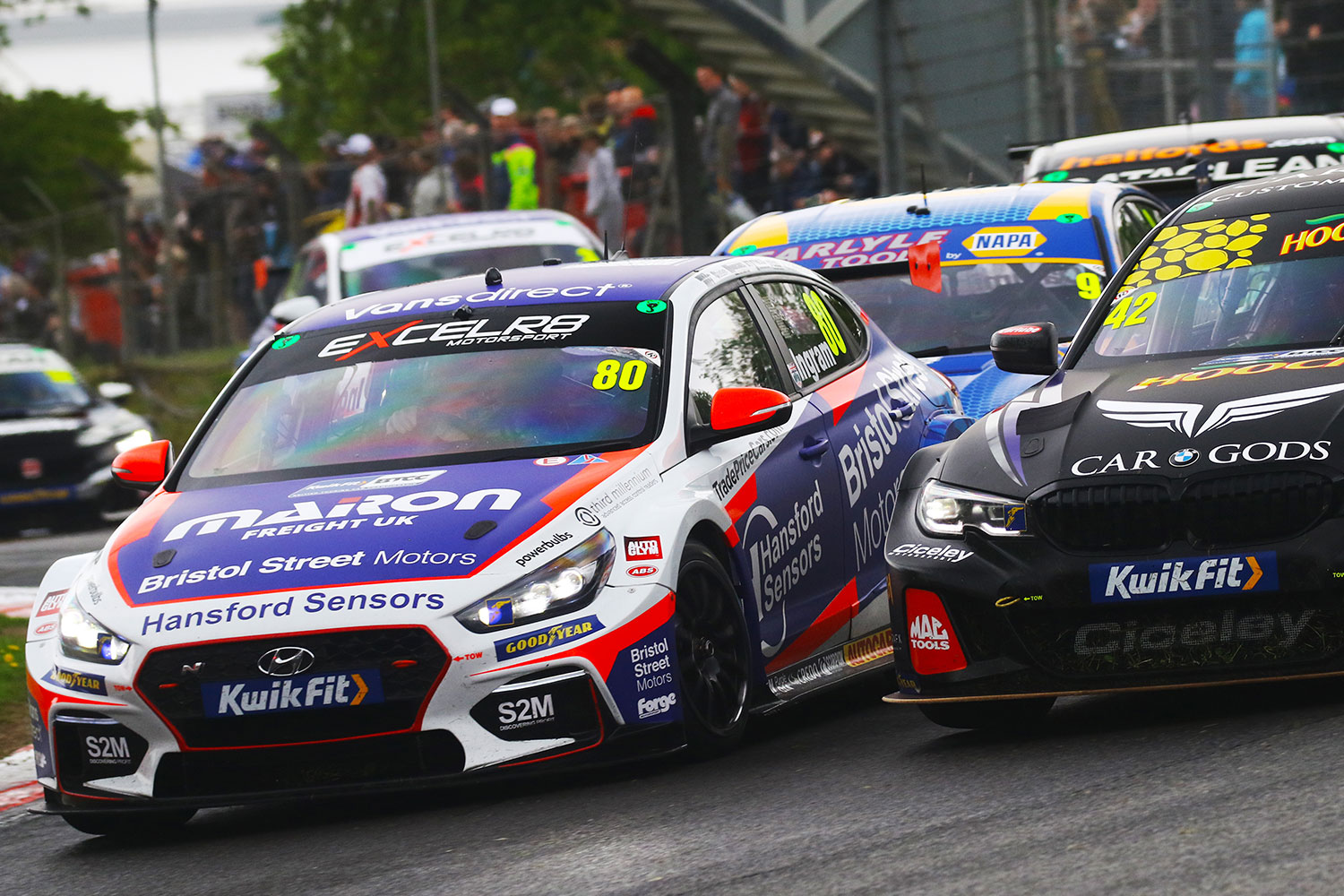 The weather certainly did not make things easy for British Touring Car Championship competitors at Brands Hatch yesterday (15 May), but Tom Ingram produced another masterful performance to conquer the constantly changing conditions and increase his advantage in the chase for the coveted crown.

Arriving at Brands Hatch at the summit of the standings in the UK’s premier motor racing series, Ingram seamlessly picked up from where he had left off at Donington Park three weeks earlier by lapping fastest in opening free practice around the short Indy loop, which he then backed up by going third-quickest in FP2.

Despite not benefitting from any hybrid deployment in qualifying – the penalty carried into every weekend by the championship leader – the talented Bucks-born ace impressively topped the timesheets early on behind the wheel of his Bristol Street Motors with EXCELR8 TradePriceCars.com Hyundai i30N, breaking his own longstanding lap record along the way.

Thereafter, as others exploited their extra bursts of power, he inevitably slipped down the order to sixth amongst the 29 high-calibre contenders, but to wind up a scant 0.066s adrift of the front row of the grid nonetheless represented a stellar effort that set him up well for race day.

Having fewer hybrid ‘boosts’ to play with than any of his rivals in the opening encounter, Ingram knew he would need to box clever and he did just that, displaying a deft touch on the damp track surface to despatch his adversaries one by one and climb to second.

More than four seconds adrift of the lead at one point, he dug deep in the closing stages to briefly post the race’s fastest lap and latch right onto the tail of Josh Cook at the chequered flag, flashing across the finish line barely eight tenths-of-a-second in arrears to seal his second rostrum result of the 2022 campaign.

From there, he had his sights set on victory in race two – broadcast live on the main ITV channel – but a lively opening lap saw Ingram tagged and sent skating across the wet grass at Surtees, which would be the catalyst for overheating concerns later on.

After artfully gathering the ‘moment’ up without losing too much ground, he conceded places to Rory Butcher and Dan Cammish before withstanding the threat of multiple champions Gordon Shedden and Ash Sutton behind. The 28-year-old looked poised to gain a position when Jake Hill spun on the penultimate tour, only to find himself delayed by the BMW rejoining, which allowed the opportunistic Sutton to sneak through into fourth, relegating the Hyundai to fifth.

The greasy intermediate conditions persisted in the day’s finale, when from eighth on the partially-reversed grid, Ingram vaulted up to sixth at the start, relieved team-mate Tom Chilton of fifth approaching mid-distance and pinched fourth when George Gamble ran wide at Druids.

Soaking up intense pressure from a hard-charging Butcher and Sutton over the second half of the race, the two-time BTCC Independents’ Champion fended his pursuers off all the way to the flag to secure a sixth top five finish from as many starts this season. In so doing, he extended his margin in the Drivers’ classification to eight points, with EXCELR8 similarly in charge in both the Teams’ and Manufacturers’ battles ahead of the next outing on the schedule at super-fast Thruxton on 28/29 May.

“It was a really good weekend all-in-all, with another great haul of points. The circuit had been resurfaced since pre-season testing, which made quite a big difference to the grip level in several corners but we started off in a good place and the Hyundai felt strong in free practice.

“We knew we would struggle in qualifying without any hybrid power, so we were pleased to be in the mix in sixth, and if somebody had offered me second place in race one going into the weekend, I would have snatched their hand off!

“In such tricky conditions, it was all about being patient and looking after the tyres, because they were inevitably going to wear down towards the end. If I’d been a bit further back on the grid, I would probably have taken the risk to bolt on slicks as it felt like they might turn out to be the right call, but when you’re leading the championship, there’s no point trying to be a hero and we couldn’t afford to gamble. We had to copy what our immediate rivals were doing, be sensible and play it safe to ensure we brought it home.

“There was only really one line, and the moment you strayed away from it, it felt like driving on an oil slick – even the slightest of mistakes was enough to send you bouncing across the grass – so I was very happy to finish second. It goes without saying that I always want to win, but ultimately, it’s the points that are important and it was great to start the day so well.

“After the contact on the first lap in race two, I was left nursing a bit of a problem as the radiator was stuffed with grass, which meant I had to back off slightly to manage the engine temperature. That obviously wasn’t ideal, so to still finish fifth in the circumstances was a good result, and to complete the day with fourth place in race three represented more solid points.

“We were consistent throughout, which was very encouraging, and we need to maintain that mentality now and stay level-headed moving forward. I’m hopeful that hybrid might not be quite so effective at Thruxton as we will be driving at such high speeds already, and it’s a circuit that I love and where I have won in the past. I’m feeling really confident in the Hyundai and the team is performing fantastically – so let’s see if we can keep this momentum going…”