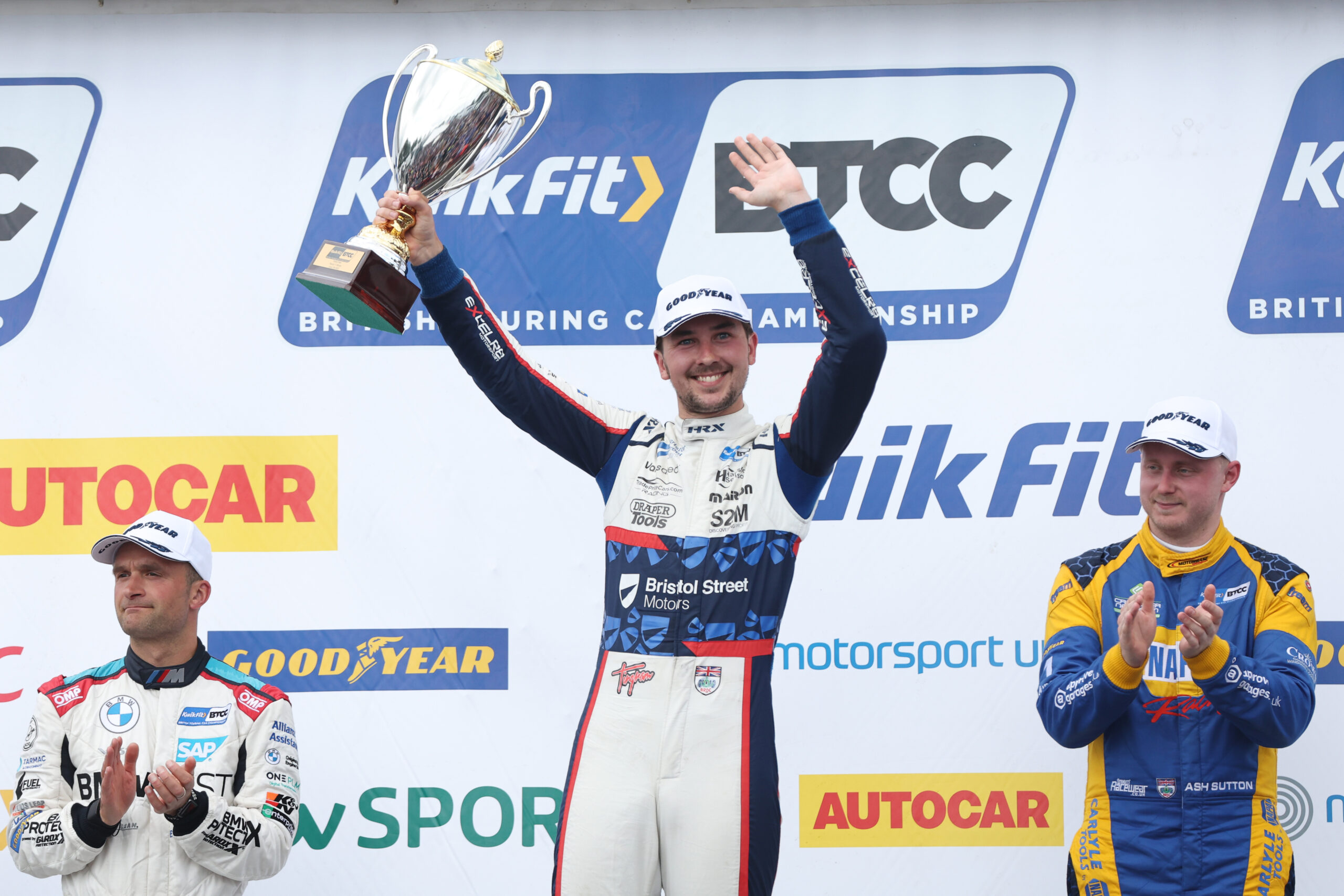 Prior to last weekend, Tom Ingram had 53 podium finishes to his credit in the British Touring Car Championship – but none of them had come at Oulton Park. Yesterday (12 June), he put that statistic to bed in fine style, with a dominant double victory around the undulating Cheshire circuit that keeps him firmly in the title hunt.

In his eight full seasons in the BTCC to-date, Ingram has been habitually unlucky at Oulton, but this time, there was to be no holding him back. After placing second-quickest in both free practice sessions behind the wheel of his Bristol Street Motors with EXCELR8 TradePriceCars.com Hyundai i30N, he proceeded to clock a new lap record in qualifying – dipping beneath a benchmark that had gone unbeaten for seven years – to secure a fifth career pole position amongst the 29 high-calibre contenders.

Despite having less hybrid power at his disposal than the three drivers closest to him on the grid in the curtain-racing contest – his 25th BTCC start at Oulton – Ingram converted his qualifying advantage into a seamless lights-to-flag triumph in front of the live ITV television cameras and a capacity trackside crowd.

A mid-race safety car intervention erased the 1.4-second cushion he had built up over the chasing pack, but the talented Bucks-born ace re-established that margin and more besides once the action resumed, easing effortlessly away from his pursuers to take the chequered flag a commanding 3.3 seconds clear of defending champion Ash Sutton. The proverbial Sunday afternoon stroll, the result broke his Oulton Park duck – and hoodoo – in emphatic fashion.

His success meant Ingram would have less hybrid deployment than any of his adversaries in the next outing, but again, he did not let that deter him. In a cat-and-mouse duel between two of the BTCC’s leading lights, he had an answer for everything Sutton could throw at him, with a peerless performance earning the two-time Independents’ title-holder a 22nd career win in the UK’s premier motor racing series – and the landmark 300th victory of the BTCC’s current NGTC era.

From 12th on the partially-reversed grid for the day’s finale – and for the second race weekend in succession – Ingram very nearly found himself wiped out on the opening lap as carnage on the run to the chicane sent him spearing spectacularly off-track in avoidance. Showcasing his laser-sharp reactions and extraordinary car control, the 28-year-old produced an astonishing save, but his wild ride left the radiator of his Hyundai stuffed with grass, necessitating a pit-stop to scoop it out.

After rejoining the fray down in 25th place, he lapped consistently faster than the leaders as he battled his way back to 17th at the flag, barely half-a-second shy of a points-paying finish despite the notorious difficulty of overtaking at Oulton. That means Ingram will travel next to Croft in North Yorkshire (25/26 June) sitting second in the standings in the chase for the biggest prize in British motorsport – and brimful of confidence for the remainder of the 2022 campaign.

“Finally, after however many years of struggling at Oulton, I’ve got the monkey off my back! It’s a track that had never been particularly kind to me in the past – something would always go wrong – and I think historically, that was a by-product of having made a good start to the season, which meant I tended to arrive heavy on ballast and that then left me playing catch-up for the rest of the weekend.

“This time, everything was perfect straight out-of-the-box. The team did a fantastic job and the Hyundai honestly felt phenomenal throughout – the best car I’ve ever had around there and an absolute pleasure to drive. Right from the word ‘go’, it did exactly what I wanted it to, which is so rare in this game.

“We were in the ballpark during free practice, and with 4.5 seconds of hybrid power available – which I hadn’t had for the previous two events due to leading the championship – I went into qualifying thinking, ‘I just fancy this… I reckon we could have a shot at it’.

“Grid position is super-important at Oulton and the key to a good race day – it’s a bit like the Monaco of the BTCC calendar because it’s so tricky to overtake there – so I was really pleased to hook the lap up and it was brilliant to line up on pole. To set a new qualifying lap record was simply the icing on the cake.

“From there, I felt super-pumped going into Sunday. I could control the pace in the first race with the other guys squabbling behind, but Ash [Sutton] was quick in race two and it was to-and-fro. Every time he closed the gap, I had to push to stretch it out again and it was nip-and-tuck the whole way. We all know what Ash is like – as soon as there’s an opening in front of him, he’ll fill it so I had to be really mindful of that while trying to keep a slight buffer, in the knowledge that he had more hybrid at his disposal than I did.

“Lights-to-flag wins like that might look easy, but you can never count your chickens too soon in the BTCC and you’re always having to manage something – from the brakes to the tyres or staying off the kerbs. With hybrid to think about now as well, there’s so much going on at the same time but when you have a car that feels so good, you have to score big and that’s exactly what we did.

“Starting 12th on the grid for race three, we were then properly in the danger zone where you don’t want to be, and I was trying to stay out of trouble but unfortunately got drawn straight into it! Thankfully there was no real damage to the car, and while the first lap incident cost us some points, the most important thing is that everybody involved is generally ok and I wish both Dan [Lloyd] and Colin [Turkington] a very speedy recovery.

“We were still able to show our speed fighting back through the pack – even with hardly any hybrid available – and that bodes really well going forward. With the form we’re in right now, I can’t wait for Croft!”