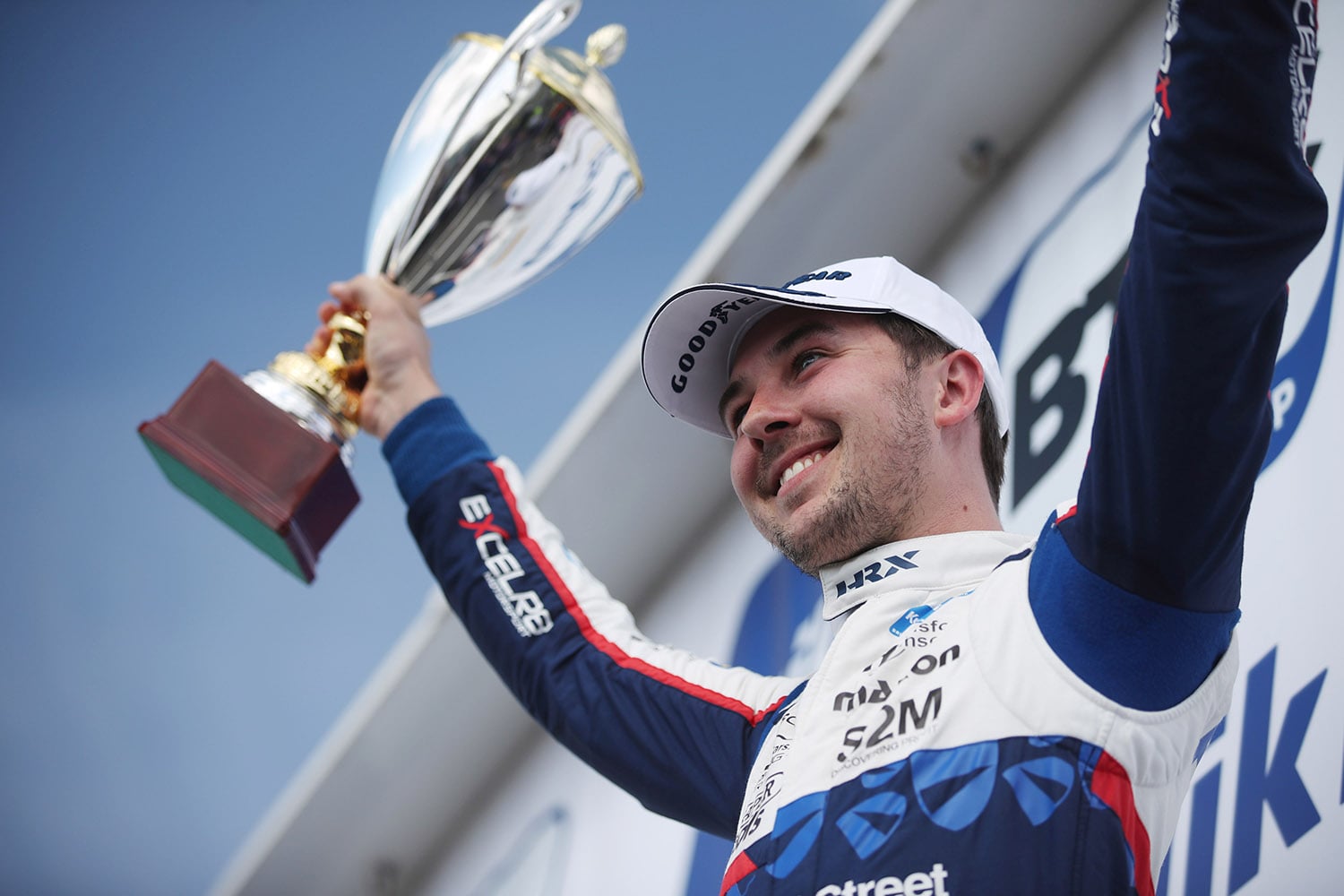 For the third time in his British Touring Car Championship career, Tom Ingram won the opening race of the campaign yesterday (24 April), as the Bristol Street Motors with EXCELR8 TradePriceCars.com star made history and drew first blood in the 2022 title chase at Donington Park.

Entering his ninth season in the UK’s premier motor racing series, Ingram was on the pace from the outset around the Leicestershire circuit, topping the timesheets in free practice by almost four tenths-of-a-second behind the wheel of his Hyundai i30N. He looked set to replicate that performance in qualifying amongst the 28 high-calibre protagonists, only for oversteer on his best lap to leave him a scant 0.063s shy of pole position.

In an incredibly tight session, that restricted him to fourth on the starting grid for race one, but in front of the live ITV4 television cameras and a capacity trackside crowd, he went immediately on the offensive. After neatly despatching defending champion Ash Sutton for third, the talented Bucks-born ace took advantage of a squabble between the leaders on lap two, reading the developing situation to perfection to undercut them both at Coppice and seize the initiative.

Thereafter, he artfully managed both a safety car intermission and the gap behind to multiple title-winner Colin Turkington to seal his 20th career triumph in the championship – going down in the record books as the first winner of the BTCC’s new hybrid era, while tallying an extra point for posting the race’s fastest lap.

His success meant Ingram would need to contend with fewer ‘boosts’ of additional hybrid power than any of his rivals in the day’s second contest, but he nonetheless confidently held sway at the head of the field for more than half of the race, prior to ceding to the inevitable on lap ten as the pursuing Gordon Shedden found a way past.

Refusing to give in, the two-time BTCC Independents’ Champion dug deep to maintain the pressure on the new leader as he plotted a late counter-attack, ultimately missing out on a famous double victory by less than two tenths-of-a-second.

From eighth on the partially-reversed grid in the finale, Ingram gutsily kept his foot planted around the outside of Redgate Corner for the first time to rise to seventh, before getting the better of an entertaining battle with Rory Butcher and latching onto the tail of the scrap for the bottom step on the podium.

By dint of saving much of his hybrid energy until the closing stages, the 28-year-old was able to pinch fifth from Adam Morgan on the penultimate tour – earning him a seven-point margin over his adversaries at the summit of the standings and prompting 1992 title-holder Tim Harvey to remark that ‘if ever Ingram has looked like a champion in-waiting, it’s now’. The 2022 BTCC campaign will resume at Brands Hatch’s Indy Circuit on 14/15 May.

“That was a lot of fun – one of the most enjoyable weekends I’ve had in the BTCC. We worked so hard with the Hyundai over the winter, and it felt absolutely fantastic. In the corners, it was simply phenomenal – it did everything I wanted it to.

“Race one was the perfect way to begin the season – starting as we mean to go on! The first couple of laps were a bit spicy as it all kicked off ahead, and after that, with Colin [Turkington] pushing me along and Jake [Hill] closing onto the back of him, there was never any point at which I could just relax or focus on bringing it home.

“I always had one eye in my mirrors while trying to look after the tyres and brakes, and thinking about when to deploy the extra power added another dynamic – there’s a lot more to manage now from a driver’s perspective, but becoming the first person ever to win in a hybrid touring car was awesome, and quite a cool thing to be able to say.

“Race two was another mega result. I knew I had to try to keep my powder dry until later on when I would really need the hybrid boosts. I wanted to use them to attack rather than to defend, and that was what got me back into the fight towards the end. To come away with a double podium on Bristol Street Motors’ first weekend with the team was a brilliant outcome.

“I’ve got to say, it’s nice no longer having to strap the equivalent of a baby elephant into the car when you’ve won! The success ballast in recent years was so difficult, because you would rarely be driving the same car twice, whereas now we have a known quantity in every single session and that enabled us to really concentrate on refining the balance and performance of the i30N over the off-season.

“Not needing to keep adjusting the set-up to adapt to the weight you’re carrying makes a massive difference. Now you can just make small tweaks rather than having to reinvent the wheel, and I like being a bit more in control of my own destiny.

“I don’t necessarily think we had the quickest car at Donington, but I feel in a very good place with the Hyundai at the moment and I’m really happy. I’ll go to Brands Hatch pumped-up to try to qualify on pole. Will that be difficult with less hybrid boost than everybody else? Of course, but it should also be a hell of a lot easier than with the 75kg we would have been lugging around under the success ballast system…”