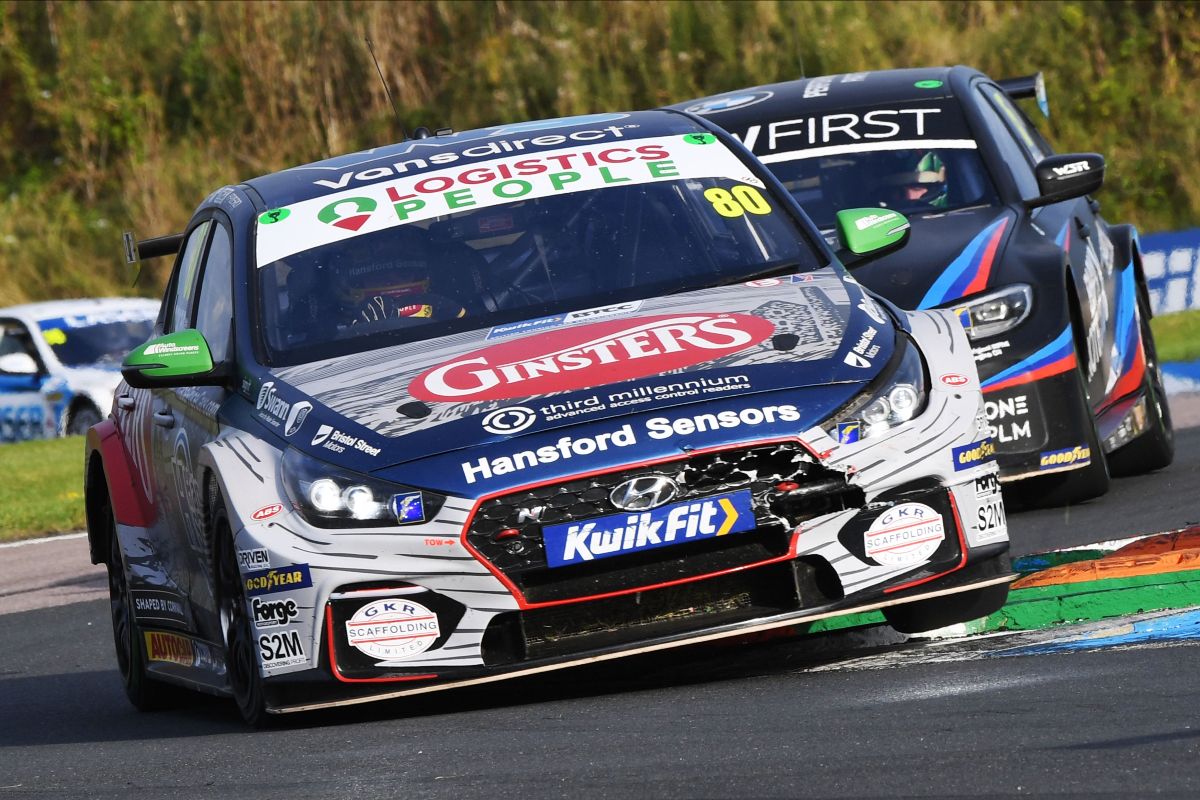 Tom Ingram showcased his renowned overtaking prowess and the raw pace of Ginsters EXCELR8 with TradePriceCars.com’s Hyundai i30N in the British Touring Car Championship at Thruxton last weekend (28/29 August), as he battled back from bad luck to remain very much in the mix for the biggest prize in national motorsport.

Arriving at Thruxton sitting second in the standings, Ingram had to carry 66kg of success ballast into qualifying and around the high-speed Hampshire circuit – the quickest in the country – that restricted him to a frustrated 12th on the grid amongst the 29 high-calibre contenders for the curtain-raising contest.

Knowing that the early stages represented his best chance of making up ground, the talented Bucks-born ace snatched three positions over the course of an assertive opening lap in front of the live ITV4 television cameras and capacity trackside crowd. Thereafter, he settled into a multi-car scrap for sixth and produced a superb defensive effort against a gaggle of lighter pursuers filling his rear-view mirrors.

The pressure intensified during the second half of the race, as his tyres inevitably faded due to the additional weight and he found himself struggling for grip in a tense tussle with double BTCC champion Jason Plato – the most experienced driver in the field. As the pair duelled frenetically at full-throttle, something had to give, and Plato finally succeeded in prising the door ajar on the penultimate lap.

Fellow multiple title-winner Colin Turkington similarly snuck ahead of the Hyundai, but Ingram hit back with a gutsy pass around the outside of the Complex to reclaim tenth place before the chequered flag fell.

With his ballast reduced to just 9kg for the second encounter, the 28-year-old – 19 times a race-winner in the UK’s premier motor racing series and the lap record-holder at Thruxton – went immediately on the attack, pulling off a number of eye-catching overtakes to advance to sixth by the end of lap two and then swiftly latching onto the tail of Rory Butcher in fifth.

Despite being stuck in traffic, he posted the second-fastest lap – matching that of the winner – and fought his way past Butcher with a well-thought-out move at the Complex, but heartbreak would ensue in the closing moments when he picked up a puncture at the quickest part of the circuit.

Artfully avoiding an accident but limping across the finish line a hugely disappointed 12th, the misfortune was a double blow as it not only cost Ingram valuable championship points, but also a second row starting spot on the partially-reversed grid for race three.

Undeterred, he was already up to ninth when the safety car was summoned for an accident at the back of the pack on the first lap. When the action resumed, the two-time BTCC Independents’ Champion despatched arch-rival Ash Sutton around the outside of the chicane before unleashing a new fastest lap – almost half-a-second better than anybody else would muster throughout.

Another brave move on Tom Oliphant rewarded Ingram with seventh, but then his burgeoning momentum was stopped in its tracks by two further neutralisations. With just four laps remaining at the final re-start, he gained two more places at the expense of Josh Cook and Butcher to take the flag fifth following a characteristically committed, on-the-edge performance.

The result consolidated the three-time Ginetta Champion and former British Karting Champion’s second position in both the overall and Independent Drivers’ tables, and whilst his Thruxton travails mean he has conceded some points to Sutton, he is fully focussed on fighting back at Croft in North Yorkshire in three weeks’ time (18/19 September).

“I love Thruxton, but we knew we were on the back foot going there with the weight we had on-board, and we had to knuckle down to try to extract the most we could from the weekend. We changed the Hyundai quite a lot compared to when we were there back at the start of the season and it felt good, but we just struggled with the ballast in qualifying, to be honest – we’ve gone into the last four events carrying 66kg, and it’s really tough to convert that into a decent grid position in a front wheel-drive car.

“We made a couple more tweaks for Sunday, and race one was all about securing as many points as possible. It felt like a lot of hard work for what we got out of it and I don’t tend to get overly excited about tenth-place finishes, but it was a solid result in the circumstances and put some points on the board without incurring too much damage. The battle with Jason [Plato] was good fun, and fair play to him, he pulled off a cracking move to get past.

“Most importantly, it meant we could remove most of the weight for race two, and the i30N really comes alive in those situations. What then happened at the end was a real kick in the teeth, because we’d pushed hard and done what we needed to do, only to lose it all to the puncture.

“The one thing we needed most of all in race three was laps, and that was the one thing we didn’t get due to the constant safety car interruptions. The Hyundai felt awesome, so it was a shame not to be able to fully exploit that, but ultimately, we still scored good points and took some back from Ash [Sutton], which is what we had to do. It was a positive way to finish the weekend and I was particularly pleased to pinch fifth on the final lap as you never know – that extra point could prove crucial come the end of the season.”