Ingram fired-up to fight back after damage limitation at Thruxton 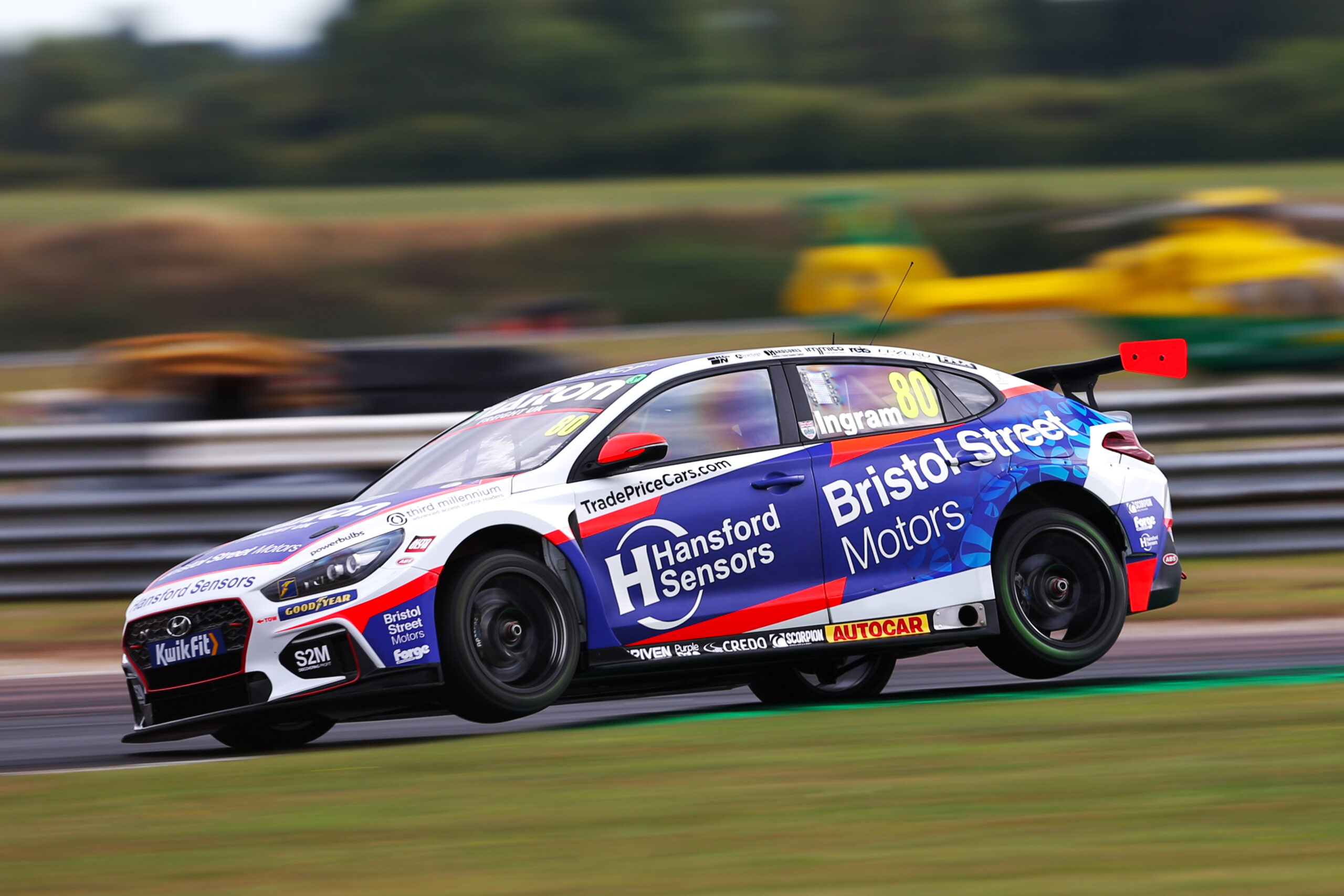 Tom Ingram is targeting a champagne celebration at his most successful circuit when the British Touring Car Championship resumes at Silverstone next month, after digging deep for a trio of top ten finishes during a troubled weekend at Thruxton (27/28 August) to keep his title aspirations very much alive.

The talented Bucks-born ace came out-of-the-blocks in blistering form around the fastest track in the country, outpacing his 28 high-calibre adversaries to the tune of almost half-a-second in the first free practice session behind the wheel of his Bristol Street Motors with EXCELR8 TradePriceCars.com Hyundai i30N – but then, ill-fortune intervened.

An overheating engine in qualifying resulted in a leak that spat water onto the tyres, adversely affecting his car’s handling. Finding himself having to unexpectedly wrestle the Hyundai around Thruxton’s flat-out sweeping curves, Ingram wound up a frustrated 13th on the grid in the UK’s premier motor racing series – when just another tenth-of-a-second would have put him significantly further up in seventh.

In front of the live ITV4 television cameras the following day and a capacity trackside crowd, the two-time BTCC Independents’ Champion artfully avoided a slow-starting Jason Plato at lights-out in the curtain-raising contest and a clash directly ahead of him on lap two to rise to ninth, where he would remain to the chequered flag – outscoring chief championship rival Colin Turkington in the process.

After out-dragging Michael Crees away from the line in the second outing, Ingram stole seventh from Daniel Rowbottom on lap five prior to latching onto the tail of Ash Hand, who peeled into the pits shortly before mid-distance with engine failure. Despite visibly struggling for grip, he retained sixth position to the end – earning him the same spot on the partially-reversed grid for the day’s finale.

By dint of a smart outside-inside switch through the opening complex of corners, the 29-year-old swiftly climbed to fourth and briefly looked set to challenge the BMWs ahead, until gearbox gremlins dropped him back into the clutches of the chasing pack. Thereafter forced into a rearguard action, he battled hard to secure a seventh-place finish, leaving him just 18 points adrift of the championship lead travelling next to Silverstone on 24/25 September.

Not only that, but the legendary ‘Home of British Motor Racing’ has been a happy hunting ground for Ingram in the past – yielding an impressive five victories and six further podium appearances since 2016 – meaning there could be no better place to immediately reignite his bid for the biggest prize in national motorsport.

“Thruxton was a weekend that promised so much but ultimately, didn’t quite deliver for us. It was a real swings-and-roundabouts story in terms of the championship picture and while on the surface, it would be easy to be disappointed with our results, the reality is we’ve actually only lost three points in the title standings so in the grand scheme of things, it could have been much worse.

“I was really excited heading into the weekend; Thruxton is such a mega circuit and one I always love going to, and we worked really hard on our pre-event preparations. The Hyundai felt absolutely incredible in FP1 – the best car I’ve ever driven around there – and we genuinely believed we were on for pole position, but despite making no changes and nothing really changing in the track conditions either, it felt completely different in qualifying and we obviously came up some way short. The engine issue definitely played a part in that, but I don’t think it was the full cause of our lack of pace.

“We had to put that behind us on Sunday, crack on and try to recover as best we could. It’s never easy to overtake at Thruxton, but we went into race day fully focussed on fighting our way up the order and we picked up a decent haul of points – despite grappling with understeer in race one and oversteer in race two. A large part of success in the BTCC is down to making the most of your bad days, and all things considered, I think we did a solid job.

“Then in race three, we had a gearbox problem that kicked in after the first few laps, which was even more frustrating as the car felt the best it had all day! That kind of summed Thruxton up for us; it was one of those weekends where – FP1 aside and for a variety of reasons – it felt like we were trying to push water uphill, but while we’ve had the wind knocked out of our sails slightly and lost a bit of momentum, that will only make us even more determined to bounce back.

“I’m still very confident because when the Hyundai is on-song, we know just how phenomenal it is and I really enjoy this part of the season – digging deep for those crucial last few points is a challenge I relish. Silverstone and Brands Hatch GP are both tracks that should play to our strengths and where I’ve gone well in the past, so it’s full-scale attack from hereon in. Let’s see where that leaves us after the final flag falls…”