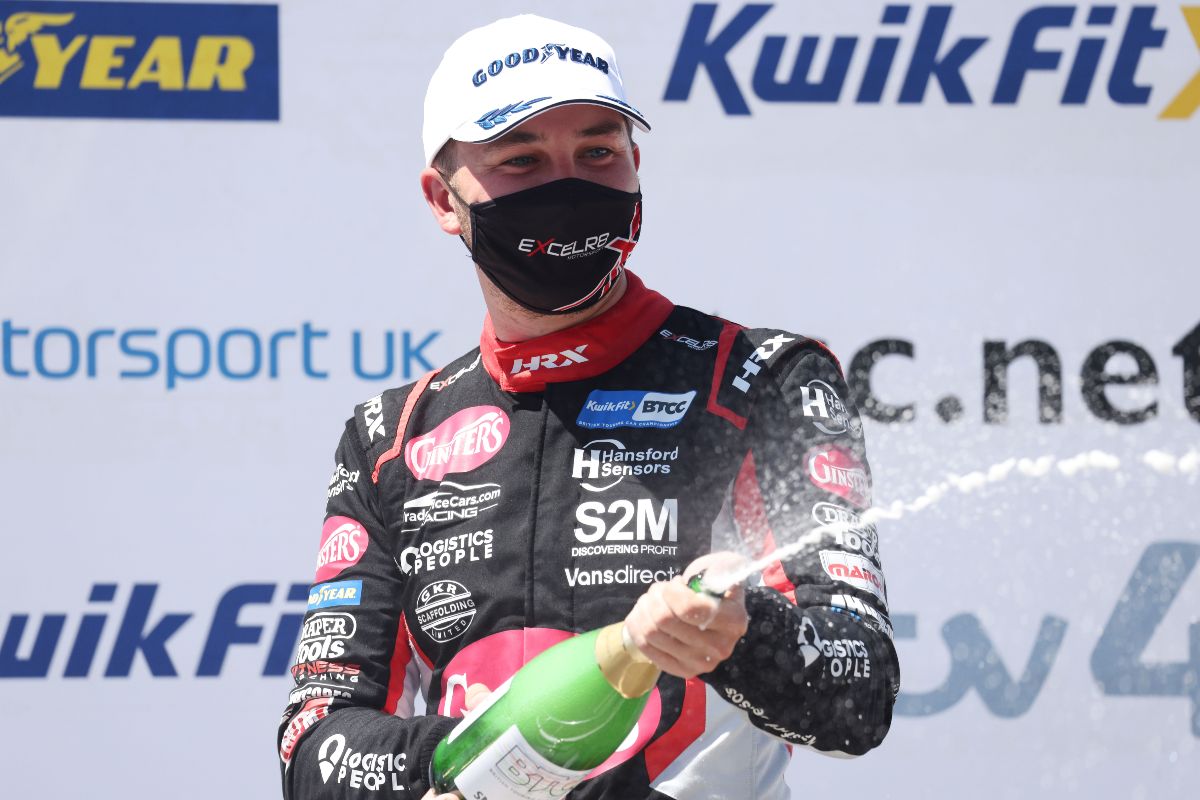 Tom Ingram made history in the British Touring Car Championship at Snetterton yesterday (13 June), producing a stunning performance in only his second weekend for Ginsters EXCELR8 with TradePriceCars.com to score Hyundai’s maiden victory in the UK’s premier motor racing series.

On the pace from the outset at EXCELR8 Motorsport’s home circuit, Ingram began the weekend by topping the timesheets during free practice amongst the 29 high-calibre contenders. In a two-part qualifying session, he then comfortably progressed through Q1 in second position – even having the luxury of being able to warm his tyres up for Q2 in the final moments – before repeating the feat in the ‘Top Ten Showdown’ to confidently put his Hyundai on the front row of the grid. More impressive still was the fact that – with 33kg of success ballast on-board from Thruxton last month – the i30N was the heaviest car inside the top six.

In front of the live ITV4 television cameras and – for the first time in more than 18 months – 4,000 of the BTCC’s loyal and enthusiastic fans, the talented young Bucks-born ace elected to bolt on the softer ‘Option’ tyre for the curtain-raising contest. After holding position at lights-out, he proceeded to repeatedly attack race leader Colin Turkington around the course of the opening lap, evoking memories of last season as he tried every which way to prise the door ajar.

Despite no opportunity presenting itself, Ingram continued to keep Turkington honest, unleashing a brace of fastest laps midway through and prompting the four-time champion to subsequently admit that he’d had to drive at ‘ten-tenths’ to maintain his advantage. With no pressure from behind, the 27-year-old then called off the chase in the closing stages in the interests of preserving his tyres in the intense summer heat, while safeguarding his second podium finish of the campaign and first Independents’ win.

With his additional weight doubled to 66kg and running on the medium tyres in race two, a strong launch and superb exit from Turn One allowed Ingram to get the undercut on Turkington at the start, but the Hyundai was shoved brusquely onto the grass, costing it a position to the Ford of Ollie Jackson. After bravely fighting off a ballast-free Ash Sutton for a while before ceding to the inevitable, the two-time BTCC Independents’ Champion then focussed on attempting to reclaim third place from Jackson.

On the penultimate lap, Ingram finally snuck through at Wilson, only to run wide at the following corner and drop back to fourth, missing out on a second consecutive visit to the rostrum by just 0.166s – but the result nonetheless represented another excellent points haul.

From fourth on the partially-reversed grid in the day’s finale, the three-time Ginetta Champion and former British Karting Champion out-dragged Rory Butcher away from the line to move up to third, thereafter immediately applying pressure on the race-leading BMWs and advancing to second when they made contact on lap two. After out-foxing Stephen Jelley for the top spot into Wilson three laps later, he went on to make good his escape, having enough in hand even when multiple champions Sutton and Gordon Shedden began narrowing the gap towards the end.

Not only that, but his 17th BTCC career triumph made Ingram the highest scorer of the weekend, elevating him to second in the overall Drivers’ classification – a mere two points adrift of the summit of the standings – and top of the Independents’ table as the series travels next to Brands Hatch on 26/27 June.

“After a good first event with the team at Thruxton, to come to Snetterton and leave with a win, a second place and a fourth is amazing. We entered the weekend targeting big points, and that’s exactly what we achieved.

“Right from the first free practice session, the Hyundai felt incredible and I was really pleased with qualifying – to put the i30N on the front row of the grid with the weight we were carrying was a great result. It wasn’t a perfect lap – I made a mistake into the first hairpin and didn’t quite get everything out of it – but equally, knowing we had more speed still to extract left me feeling positive for race day.

“Due to the rear wheel-drive cars taking longer to bring their tyres up to temperature, I knew the first lap in race one was going to be my best opportunity to pounce and I love that phase, when the car feels really alive and on-the-edge.

“The Hyundai felt fantastic and I nearly managed to get Colin [Turkington] with a couple of switchback moves, but he’s been around a while and knows what to do to defend his position. Had it not been so warm, I would probably have pushed a bit harder to try to close the gap later on, but with the soft tyres and it being the first race of the day, the risk versus reward just wasn’t there with second place effectively in the bag.

“The battle with Ollie [Jackson] in race two was really good fun. Lugging the weight around on the medium tyre, we knew we were going to be vulnerable but the race began to come back to us towards the end and I was very happy to take fourth and more good points.

“To then finish the weekend off with a win in race three, at EXCELR8’s home track and in front of the fans for the first time in more than a year-and-a-half felt really, really special – being able to wave to everybody on the slowing-down lap was just the icing on the cake.

“I could see I was quicker than the BMWs ahead and I could tell Jelley was nervous because he kept braking early, so I was biding my time because I knew we had the pace. After I got into the lead, I tried to build up a bit of a margin while remaining mindful of not taking too much out of the tyres, so I would still have some performance left at the end if I needed it.

“I honestly can’t praise all the Ginsters EXCELR8 with TradePriceCars.com guys and girls highly enough for the phenomenal job that everyone has done – I know how much this result means to everybody in the garage, and it was wonderful to share the moment with them all.

“In particular, I owe my engineer Spencer a huge ‘thank you’ for putting an insanely good car underneath me all weekend – massive credit to him. We could see the potential in the i30N from the start, and Spencer and I have refined it with all the knowledge we’ve gleaned together over the years. This is such an exciting time for us, and to have now secured Hyundai’s first BTCC win is just awesome. Hopefully it’s the first of many…”