Ingram races to rostrum on Ginsters EXCELR8 with TradePriceCars.com debut 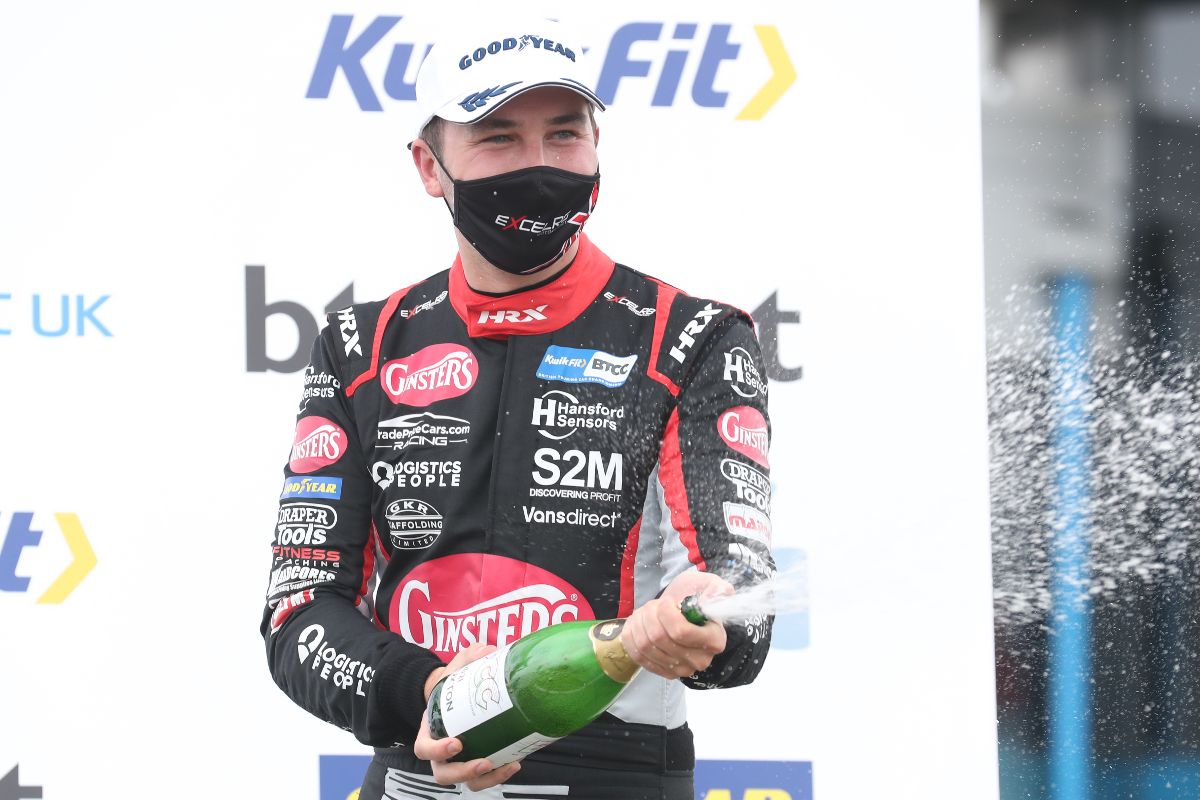 Tom Ingram backed up his pre-season confidence with a podium finish on his maiden appearance for Ginsters EXCELR8 with TradePriceCars.com at Thruxton yesterday (9 May), as he proved that he will once again be a force to be reckoned with in the Kwik Fit British Touring Car Championship this year.

Ingram has an impressive record around Thruxton – scene of his maiden car racing win just over a decade ago, as well as a commanding double victory last season in the UK’s premier motorsport series – and he was unsurprisingly a leading contender from the outset behind the wheel of his new Hyundai i30 Fastback N Performance.

On a damp-but-drying track surface in qualifying, he shot to the top of the times early on as he hustled his Hyundai around the ultra-fast Hampshire circuit in characteristically spectacular style. After slipping down the order, the talented young Bucks-born ace then vaulted back to the summit of the standings in the closing minutes as conditions improved and drivers traded their wet-weather tyres for slicks, setting the stage for a breathless end to the session.

Although he was shuffled down to fourth amongst the 29 high-calibre protagonists as lap times continued to tumble in the dying moments, it nonetheless put him solidly in the hunt – and that was only the start.

When the lights went out in the opening contest, Ingram held firm and gained a spot to third after Ash Sutton was tagged into a spin by Colin Turkington at the Complex. Immediately going on the attack, he dispatched four-time title-winner Turkington with a superb move up the inside at Church – the quickest corner in the country – before the safety car emerged to deal with a number of incidents.

Following a lengthy neutralisation, the two-time BTCC Independents’ Champion made a strong re-start, and after briefly mounting a challenge for the lead, he focussed on consolidating his position as he eased away from the duel behind for third. Taking the chequered flag barely two seconds adrift of victory, Ingram flashed his i30N’s headlights in celebration as he crossed the finish line to clinch the runner-up spoils, with the second-fastest lap of the race underscoring his raw speed.

Belying the 66kg of success ballast now aboard his strikingly-liveried Hyundai, the 16-time race-winner drew alongside pole-sitter Josh Cook at the beginning of the second encounter – after the initial attempt to get the action underway had been red-flagged due to a multi-car collision towards the rear of the pack.

Unfortunately, a slide for Cook going through the Complex for the first time forced Ingram’s i30N wide and down to fifth, and after conceding another spot to the lighter Honda of Dan Rowbottom, he subsequently fended off Turkington all the way to the flag to secure a second consecutive top six finish.

Rain beginning to fall as the cars gathered on the grid for race three prompted a last-minute change to wet-weather rubber, but with the switch being completed outside of the allotted time limit, the 27-year-old was handed a 30-second stop-go penalty. Although he moved up to fourth on the opening lap, the visit to the pit-lane left him well out of contention, and 22nd place in the final classification did not remotely reflect either his or the Hyundai’s pace.

The frustrating end to the day, however, did not take the shine off an otherwise excellent debut weekend for Ginsters EXCELR8 with TradePriceCars.com, and Ingram left Thruxton sitting sixth in the Drivers’ standings ahead of the next event at Snetterton in Norfolk on 12/13 June.

“I think we’ve shown we’re going to be at the front this year. With no weight on-board, the car is clearly there; with the weight in, we’ve got a bit of work still to do, but on the whole, we’re in the mix, and that’s really encouraging.

“Qualifying was tricky – one of those sessions where you could just as easily have ended up last as first. It all came down to timing in the end, and we were probably a couple of laps behind most in going onto slicks. We were really pleased to line up fourth in the circumstances; it put us in a strong position, which was important, and it meant we could go on the offensive straightaway.

“Race one was the first time we’d really attacked the lap in anger in the dry, which was a little bit of a step into the unknown but I enjoy those scenarios, being thrown in at the deep end. It was clear that Josh [Cook] had an edge over us so as soon as I had a comfortable gap behind, I called off the chase, especially as you’re always so worried at Thruxton about making a mistake or picking up a puncture.

“Big credit to all the guys and girls at Ginsters EXCELR8 with TradePriceCars.com – the whole team has done a tremendous job and to score a podium in my first race with them really meant the world to all of us. Having my engineer Spencer [Aldridge] here with me has made such a difference, from a continuity point of view and just knowing how to get the best out of each other – and it was so good to see the smiles on everybody’s faces.

“In race two, I lost momentum when I got checked up by Josh on the first lap, and after that, we simply struggled with the weight, to be honest. We should probably have gone back to what we know, rather than trying something different, but we learnt from that and made quite a radical change for the final race. It was disappointing not to find out if it would actually have worked, especially as we are returning to Thruxton later in the season. For me, the penalty we received didn’t fit the crime.

“Overall, though, we learnt a huge amount over the weekend and as a team, we performed really well. The important thing to take away is that we know why the Hyundai reacted the way it did in each race and we will go away and figure out what we need to do to improve it. I think we can all be very proud of ourselves and looking forward, I’m really excited.”