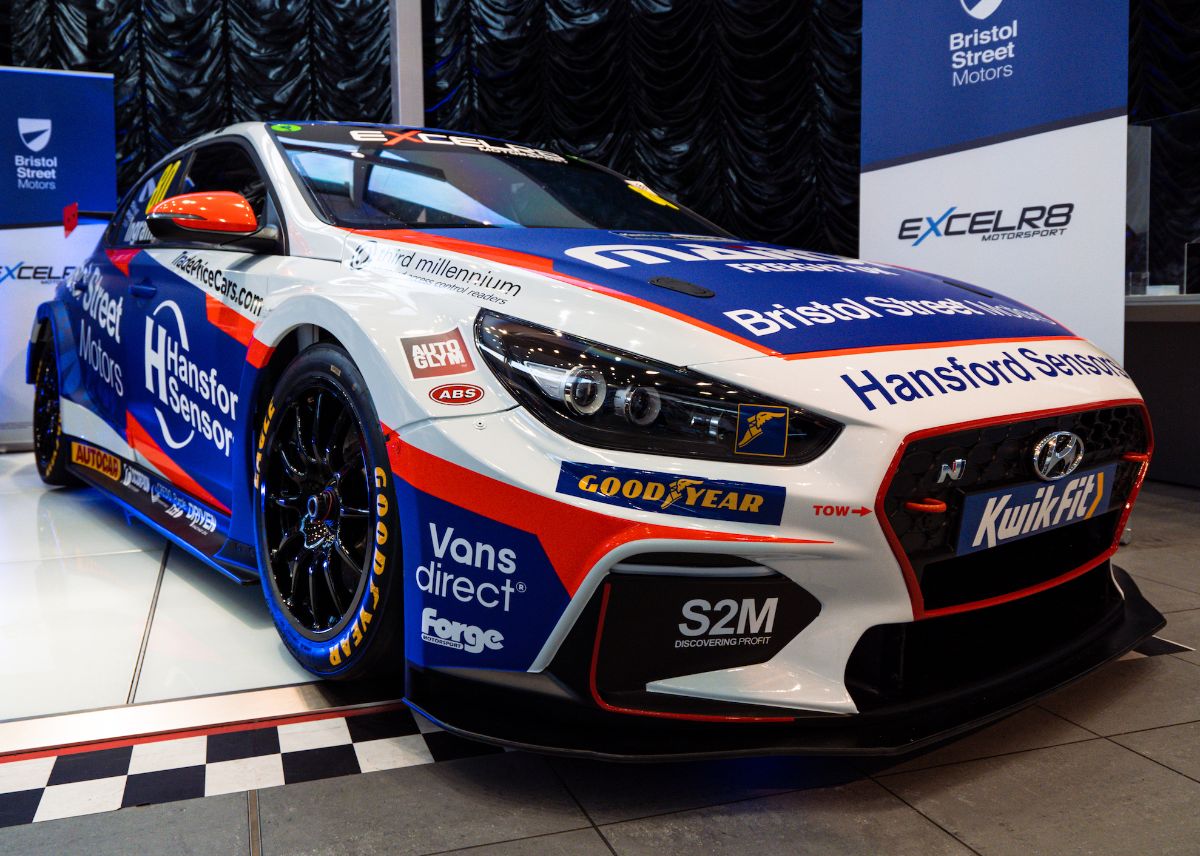 The car with which Tom Ingram is bidding to clinch the coveted British Touring Car Championship crown will sport a fresh look this year, as the Bucks-born ace took advantage of new registration day yesterday to unveil the livery that will adorn his Bristol Street Motors with EXCELR8 TradePriceCars.com Hyundai i30 Fastback N Performance over the coming months.

Ingram has been supported for the past three campaigns in the country’s premier motor racing series by Ginsters, but 2022 will herald a new dawn, as Bristol Street Motors* steps up its involvement to become title partner to EXCELR8 TradePriceCars.com. Award-winning online van retailer Vansdirect – part of the same Vertu Motors parent company – will also increase its backing for the team.

In a similar vein, the season will mark a step change for the BTCC as hybrid technology is introduced for the first time, replacing the outgoing success ballast system and offering competitors temporary bursts of extra power to assist with overtaking and defending during races.

From just eight campaigns to-date, Ingram is already 17th on the all-time winners’ list in the championship – one with a history stretching back more than six decades – and his next victory will be his 20th. He only joined EXCELR8 TradePriceCars.com last year, but the partnership yielded instant results as he achieved the first of nine podium finishes in the Thruxton curtain-raiser and went on to triumph second time out with the team on its home soil at Snetterton.

Twice an Independents’ Champion, the 28-year-old has been a leading contender for the BTCC Drivers’ title outright in each of the past five seasons. That is where his sights are solidly set heading into 2022, as he aims to build upon his and EXCELR8’s burgeoning momentum by shooting for the biggest prize in British motorsport – and after pulling the covers off his i30N at Bristol Street Motors Hyundai in Nottingham once again, he is bullish about his prospects.

The high-speed action will get underway at Donington Park in Leicestershire on 23/24 April, with every moment of the doorhandle-to-doorhandle thrills set to be broadcast live and in high-definition on ITV4.

“It’s really exciting to be going into the new season with a bit of a shake-up and a fresh livery, and it’s fantastic to see such a big automotive name as Bristol Street Motors increase its involvement with the team. They have been a loyal partner at a regional level throughout EXCELR8’s journey in the BTCC to-date, and the fact that they now want to engage even more – and on a national scale – is testament to the value they have derived from the relationship so far.

“BTCC supporters represent a very receptive target audience for Bristol Street Motors – motorsport fans and cars go hand-in-hand so it’s a natural fit from that perspective, and with dealerships all around the country, every single person at race weekends is a potential customer for them. That means they can derive really tangible benefits from their participation, and I’m very much looking forward to all the activations we are planning together.

“At the same time, I would like to personally thank Ginsters for all their support over the past three years. They played a key role in the success we achieved, and we had a lot of fun along the way. It was an excellent relationship, and while all good things come to an end, I wish them the very best and no doors are closed moving forward.

“Our full focus right now, though, is on 2022, and on putting together a committed title challenge in the first season of the hybrid era – I’m not going to hide the fact that I desperately want to become the BTCC’s first hybrid champion. This is a series whose success was initially built upon the mantra of ‘win on Sunday, sell on Monday’ – and with Bristol Street Motors, Hansford Sensors** and all our other awesome partners backing us the whole way, hopefully we’ll be doing plenty of winning on Sundays this year…”

“We’re really looking forward to partnering with Tom and the EXCELR8 team as they make their presence felt in the BTCC in 2022. He is clearly a very talented driver and unquestionably one of the leading names in the championship, and the results he achieved in his first season with EXCELR8 last year should set him up well for a title challenge.

“Off-track, Tom also works incredibly hard to further raise the profile of our brand amongst BTCC fans, so we are proud to be ramping up our support for him and the team. We look forward to seeing the Bristol Street Motors-liveried Hyundai i30N at the front of the field over the coming months, and to sharing in EXCELR8’s success. We’re all eagerly awaiting the first race at Donington Park.”

“We are delighted to be extending our relationship with Tom in the BTCC. Over the past decade, what began as a simple sponsorship arrangement to assist a promising young driver has evolved into so much more. He is a terrific brand ambassador for Hansford Sensors, a phenomenally hard worker and a shining example of local talent, and it has been an absolute privilege to be a part of his journey.

“We pride ourselves at Hansford Sensors on being at the cutting-edge of new technologies, and as such, we are tremendously excited to see how the BTCC develops in its hybrid era. Tom has been one of the championship’s top performers ever since making his debut, and we will continue to cheer him on every step of the way as he puts together what we all hope will be a successful title bid.”

** A global market leader in vibration monitoring systems, Bucks-based Hansford Sensors has supported Ingram since 2012, with 2022 marking the 11th year of the partnership.