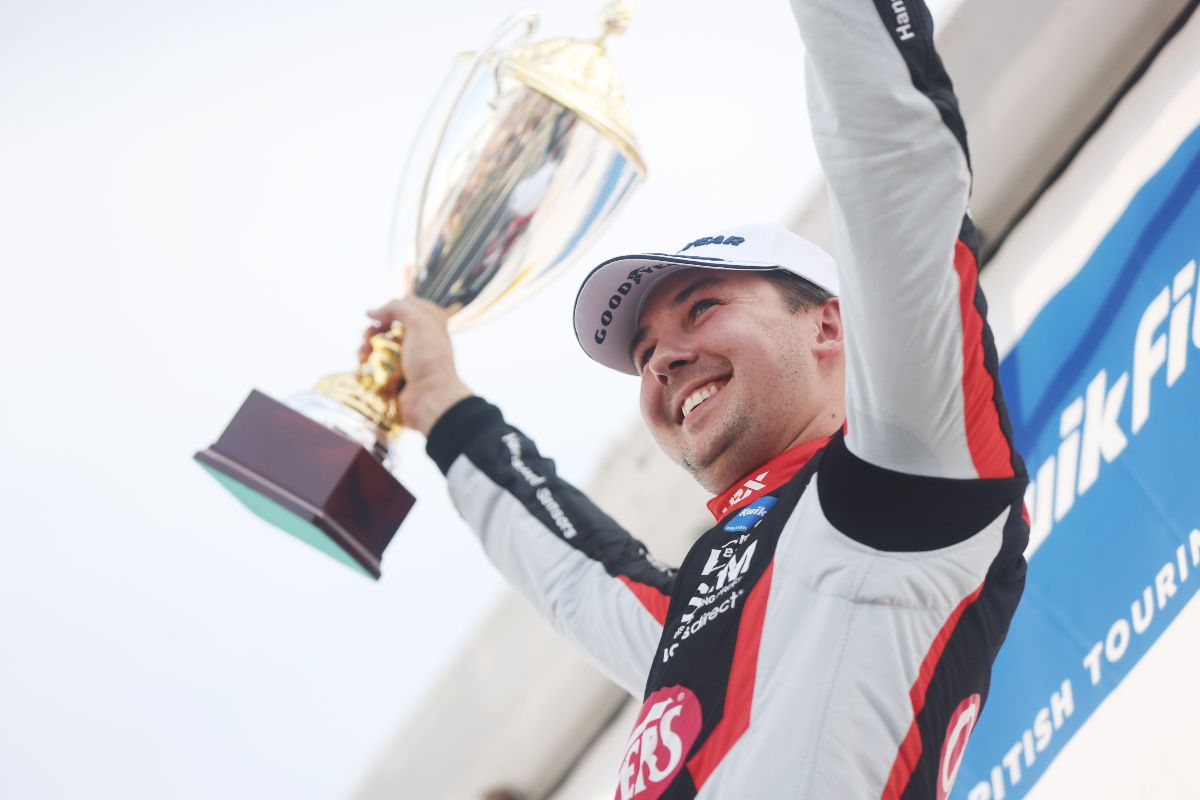 Tom Ingram produced a sensational performance to carve through the field from 11th on the grid to the top step of the podium in the British Touring Car Championship at Donington Park last weekend (9/10 October), and whilst he was subsequently stripped of his hard-fought victory, he has vowed to ‘finish the season on a high’ at Brands Hatch.

With 66kg of success ballast aboard his Hyundai i30N, Ingram knew he would be facing an uphill challenge in qualifying around the fast and flowing Leicestershire circuit, and in the two-part session, he missed out on the ‘Top Ten Showdown’ by a scant 0.044s, leaving him to line up 12th on the grid amongst the 29 high-calibre protagonists in the UK’s premier motor racing series.

From there, the Ginsters EXCELR8 with TradePriceCars.com star gained a spot to take the chequered flag 11th in the curtain-raising contest courtesy of a determined defence. More importantly, that allowed him to remove all of the weight for race two, when he unleashed a spectacular charge in front of the capacity trackside crowd and live ITV4 television cameras.

Snatching five positions on the opening lap alone, Ingram swiftly scythed past arch-rival Ash Sutton before setting his sights on Colin Turkington, making short work of the multiple BTCC Champion to climb to fifth. After similarly wasting no time at all in despatching Senna Proctor and Dan Lloyd, the 28-year-old relieved Rory Butcher of second with a committed move on lap five and by mid-distance, he had latched onto the tail of Gordon Shedden in the lead.

Spying his opportunity at Coppice, Ingram got a slingshot up the inside, completing the move into the chicane and going on to draw clear to clinch his fourth victory of the campaign and the 20th of his glittering BTCC career. Unfortunately, stewards later ruled that the overtake had been aided by contact and switched the positions back around, demoting the talented Bucks-born ace to second.

From 11th on the partially-reversed grid for race three and burdened with the full complement of 75kg, Ingram rose to eighth before artfully staving off Sutton in a defensive masterclass. After soaking up intense pressure – with a gaggle of either significantly lighter or ballast-free cars filling his rear-view mirrors – he ultimately ceded to the inevitable on lap 12 as Sutton found a way by, but he grittily clung on to a top ten finish to secure more valuable points.

That leaves the two-time BTCC Independents’ Champion third in the title table heading to Brands Hatch’s legendary ‘GP’ Circuit next weekend (23/24 October), 38 points adrift of the summit of the standings and only six points shy of second. Not only that, but it marks the fifth consecutive year that he will enter the season finale still in with a shout of claiming the most prestigious prize in British motorsport – and he has promised to ‘give it his all’.

“As I’ve repeated many times this season, when you’re in a front wheel-drive car, it’s tough going into the weekend with 66kg on-board, but that’s the price we pay for being consistently at the front. The ballast makes a big difference at Donington, but I was happy with the balance of the Hyundai in free practice and if I’d managed to hook my three best sectors together in qualifying, we’d have been through to the top ten shootout.

“I honestly don’t think we could have got very much more out of race one. The plain fact is that rear wheel-drive cars carry weight better than front wheel-drive cars do. Ash [Sutton] set the fastest lap with 75kg on, whereas we were 9kg lighter and struggling outside of the top ten. It’s difficult in that scenario, and it means we need to focus on races two and three because that’s the only chance we have to close the gap.

“I was certainly up for a fight in race two. When we take the ballast out, the car absolutely comes alive and it’s brilliant fun. The Hyundai was such a pleasure to drive, and I knew the early stages would be crucial because it’s when the tyres are at their peak that you have the greatest advantage without weight.

“Starting 11th, you are invariably at risk of getting caught up in incidents, but I think I’ve proved over the years that I can get through the pack cleanly and when we completed the first lap in sixth place, I thought, ‘this might just be on’. Saying that, I was mindful of not wanting to take too much out of my tyres too soon, so I bided my time and carefully chose my moments and it was fantastic to be able to simply pick the other guys off.

“I knew I was quicker than Gordon [Shedden], and he checked up really early into Coppice on lap ten and brake-tested me, which left me with nowhere else to go but into the back of him. The contact was so marginal – there wasn’t so much as a scratch on my car afterwards and it didn’t change his trajectory – but it was deemed to be a ‘push-to-pass’, which was a real kick in the teeth having worked so hard to get to the front.

“With the full 75kg in the Hyundai, we knew we would be facing a rearguard action again in race three, and after getting past Ash [Sutton] on the first lap, I tried to slow him up and make his life as difficult as possible because that was all I could do. It worked for a while, but there was always a certain inevitability about the situation.

“Realistically, we’re fighting for second in the championship now – the battle is to be ‘best of the rest’ since barring a disaster at Brands Hatch, Ash has got it pretty much sewn up. I’m just looking forward to giving it my all one last time this year, and hopefully we can finish the season on a high.”