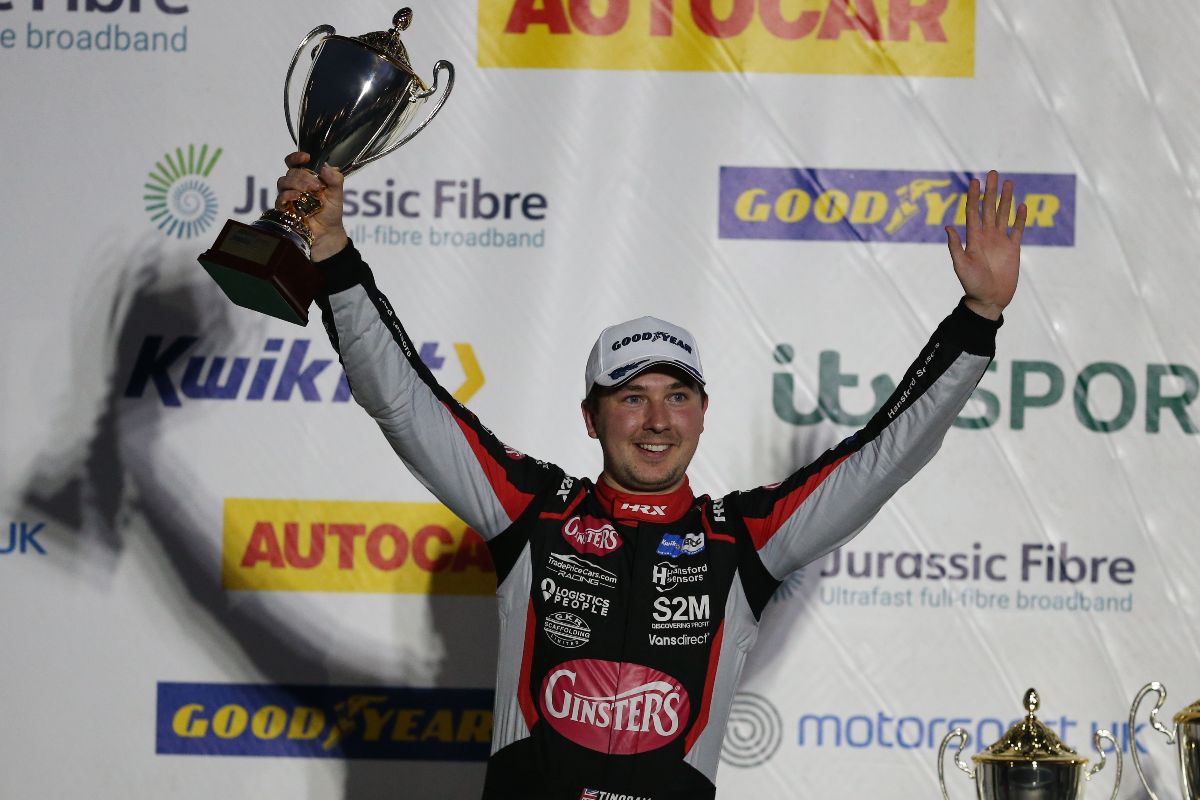 The 50th podium finish of his British Touring Car Championship career secured Tom Ingram second place in the Independent Drivers’ table at Brands Hatch last weekend (23/24 October), as he signed off his eighth campaign in the UK’s premier motor racing series with a crowd-pleasing charge through the field.

For the fifth consecutive year, Ingram entered the BTCC season finale still in with a shout of clinching the most prestigious prize in national motorsport, although with 57kg of success ballast aboard his Ginsters EXCELR8 with TradePriceCars.com Hyundai i30N, it was always going to be something of an uphill battle.

That extra weight told in qualifying as the talented Bucks-born ace could fare no better than 13th amongst the 28 high-calibre contenders – albeit barely a third-of-a-second adrift of the top spot. From there, he found his efforts to make progress in the curtain-raising contest frustrated by a defensive Jake Hill. Further hindered by suspension damage caused by opening lap contact, he went on to take the chequered flag in the same position in which he had begun.

To rub salt into the wounds, a stellar start in race two was rapidly undone when Ingram was the innocent victim of a multi-car mêlée at Surtees, relegating him to a distant 23rd place – but a determined drive saw him haul the Hyundai back up into 12th at the finish line, fairly scything past his adversaries as he lapped consistently quicker than the leaders.

In front of the live ITV4 television cameras and a capacity trackside audience, the two-time BTCC Independents’ Champion then went immediately on the offensive in the day’s finale. Taking full advantage of his now ballast-free car, he fought his way up to seventh by the end of lap two before despatching Rory Butcher and Josh Cook in one fell swoop to advance to fifth.

Following a safety car intervention to deal with an incident lower down the order, Ingram relieved Stephen Jelley of fourth into Druids and snatched third from Tom Chilton at Westfield. After closing in on Dan Rowbottom ahead, he furiously flashed his headlights in an attempt to unsettle his Honda rival but ultimately just ran out of laps to launch an attack, winding up a scant 1.5s away from victory.

The 28-year-old’s ninth rostrum appearance of 2021 – his first season competing for Ginsters EXCELR8 with TradePriceCars.com – nonetheless sealed fourth position in the overall classification, only six points shy of second, as well as the runner-up spoils in the Independents’ chase.

“It’s been an amazing season overall. [Champion] Ash Sutton is one hell of an opponent, and to match his pace has been incredibly tough, but I honestly can’t pay sufficient credit to all the guys and girls at Ginsters EXCELR8 with TradePriceCars.com. Everybody has done an absolutely phenomenal job throughout and we have achieved so many ‘firsts’, including the first win for EXCELR8 and the first win for a Hyundai in the BTCC. I think we can all be very proud of what we’ve accomplished this year.

“With the track being so cold at Brands Hatch, we had some big old slides in free practice – at one point, I left the pit-lane and was on the lock-stops from the entry to Paddock Hill Bend right the way down to the crest at the bottom, which was pretty entertaining!

“It was then really close in qualifying. The Hyundai felt absolutely brilliant – the best it has so far with that much weight on-board – and we virtually matched the existing lap record. The car was doing everything I wanted it to and I was really pleased with the lap time, so I was surprised and frustrated not to be higher up the grid.

“I went into Sunday with the mindset of going on the attack, as we couldn’t afford to sit and wait for opportunities to fall into our lap. Hill was defending like crazy in race one, and in race two, we were simply in the wrong place at the wrong time – just caught in the middle of somebody else’s accident. That prompted another recovery drive, and I enjoyed fighting my way through in race three. The i30N felt fantastic – properly on its toes – and it was nice to be able to unleash its pace at last.

“I knew I was running out of time to get Dan [Rowbottom] towards the end so I had to try something different, and with it getting dark I thought I’d turn on the ‘disco lights’ in an effort to throw him off his guard, but even that wasn’t enough! Still, I was really pleased to climb back to third after what had happened in race two – even if it was disappointing to so narrowly miss out on a top three championship finish through no fault of our own, a podium was a positive way to end the season.”