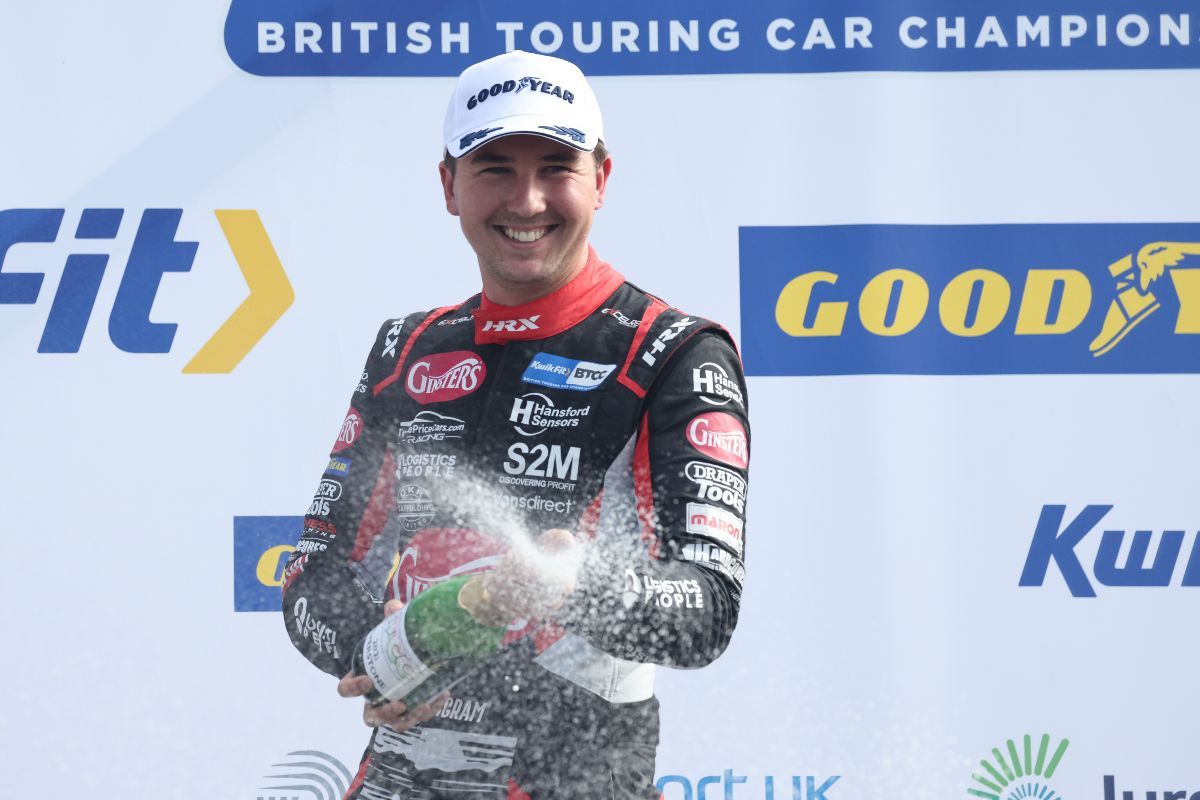 Tom Ingram moved back up to second in the standings in the British Touring Car Championship with a podium double at Silverstone last weekend (25/26 September), and as the title fight speeds towards a thrilling conclusion, the Ginsters EXCELR8 with TradePriceCars.com star has vowed to ‘keep on pushing right to the end’.

Entering the weekend occupying fifth spot in the Drivers’ classification in the UK’s premier motorsport series, Ingram was consistently there-or-thereabouts throughout free practice around the celebrated ‘Home of British Motor Racing’ behind the wheel of his Hyundai i30N.

He was a contender for pole position in the two-part qualifying session, comfortably progressing through to the ‘top ten showdown’ in third place amongst the 30 high-calibre protagonists. The talented Bucks-born ace then set the pace for much of the showdown, ultimately finding himself pipped by a scant 16 thousandths-of-a-second, but a front row berth nonetheless represented an excellent effort with 39kg of success ballast on-board.

In front of the live ITV4 television cameras and a capacity trackside crowd, Ingram seized the initiative at the start of race one before having to give best to recovering pole-sitter Rory Butcher. Thereafter, he focussed his attentions on fending off a ballast-free Dan Lloyd, which he did superbly all the way to the chequered flag, expertly soaking up intense pressure to seal the runner-up spoils and close back in on the championship lead.

With his additional weight increased to 66kg for race two, the two-time BTCC Independents’ Champion knew he would be facing a tougher challenge but he resolutely held station in the early stages, determinedly staving off Josh Cook in a substantially lighter car.

The pair engaged in a number of entertaining side-by-side scraps until Ingram eventually ceded to the inevitable on lap 17, after which a staunch defence against a marauding pack of pursuers deservedly secured him a seventh podium finish of the 2021 campaign – with third place becoming second when Cook was subsequently excluded for a ride-height infringement.

From tenth on the partially-reversed grid for the day’s finale and carrying 57kg of ballast, a bright start saw the 28-year-old gain a spot to ninth and he looked primed to go on the attack before the weight ineluctably took its toll and he slipped to 12th.

The result nevertheless made Ingram the second-highest scorer of the weekend and means he will travel next to Donington Park in just under a fortnight’s time (9/10 October) having climbed back up to second position in the chase for the coveted crown, 36 points adrift of the top of the table with 134 still to play for.

“I love racing at Silverstone, and I always seem to go well there. It’s so close that you really need to dig deep to find that last little bit, and I was very pleased to be right up at the sharp end and to qualify on the front row with 39kg on-board.

“There’s no question that Saturdays have been our Achilles’ heel this season due to the weight. We simply cannot match a rear wheel-drive car in those situations, but the Hyundai definitely felt better for carrying a bit less ballast and starting second significantly increased our chances of getting a good result out of races one and two – that was exactly what we needed, and I went into Sunday looking forward to the fight and to getting stuck in.

“I was happy with race one; considering the weight we had in the car, our pace was pretty good. Rory [Butcher] was mega quick all weekend, so I focussed on holding onto second place and scoring as many points as possible, and every time Dan [Lloyd] got a little bit closer, we could just about cover him off.

“Dan and I have been competing against each other for a long time, so we have a lot of mutual respect and I enjoy racing with him. He’s a safe pair of hands and I knew he wasn’t going to try anything crazy, but I was equally aware that if I left a gap, he would fill it so I had to be on my guard.

“Race two was fairly busy as well. The fight with Josh [Cook] was a lot of fun and it was enjoyable to be battling wheel-to-wheel. That’s what touring car racing is all about – door-to-door contact and trading paint. We lacked a little bit of pace compared to the two guys ahead, but I was still fairly pleased with the result.

“We were then thrown into the lion’s den in race three and had to try to box clever, given the ballast we were carrying and starting in the midst of a whole host of drivers with either no weight or next-to-no weight on-board.

“We struggled for straight-line speed, which made for a difficult end to the day and overall it felt like a lot of hard work to ultimately take just one point out of the championship lead, but we will keep on pushing right to the end. We’re getting to the business stage of the season now, and this isn’t over yet by a long shot…”