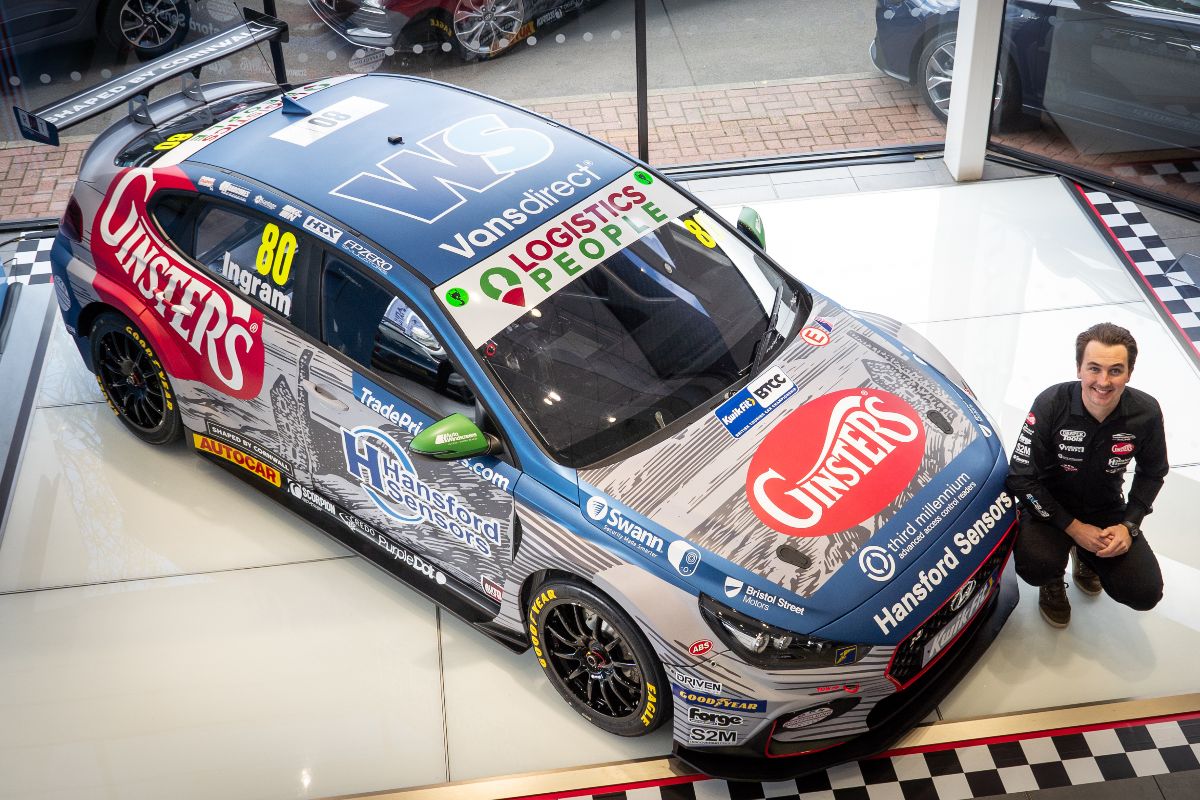 Tom Ingram is ready to fight for the biggest prize in national motorsport in 2021, after proudly taking the covers off the new Ginsters EXCELR8 with TradePriceCars.com Hyundai i30 Fastback N Performance that he will pilot in the British Touring Car Championship at Bristol Street Motors Hyundai in Nottingham today (11 April).

The forthcoming campaign represents the dawn of a new era for Ingram, who has established himself in recent years as one of the undisputed box office stars of the UK’s premier motor racing series, tallying 16 race wins, 41 rostrum finishes and back-to-back Independent Drivers’ crowns in 2017 and 2018.

After seven seasons with the same team, the talented young Bucks-born ace has now joined forces with EXCELR8 TradePriceCars.com – the biggest improver in the BTCC field in 2020 by a substantial margin, and an outfit tipped to be a bona fide title contender sooner rather than later.

The Hyundai with which he will head into battle – a podium-finisher on its debut weekend last summer – will carry the colours of Ingram’s loyal partners Ginsters and Hansford Sensors, and its eye-catching livery will be sure to grab attention.

The nation’s favourite pasty-maker, Ginsters has accompanied Ingram on his high-speed odyssey since 2019 and the side of his i30N depicts intricate wood-carved illustrations portraying unmistakeable Cornish scenes. Bucks-based manufacturing company Hansford Sensors, meanwhile, is a global market leader in vibration monitoring systems and is embarking upon its tenth season in support of the 27-year-old, who will enter the new campaign gunning for outright honours.

Following a testing schedule set to include days at Croft, Silverstone and Brands Hatch, the racing will get underway at super-fast Thruxton in Hampshire on 8/9 May, with all of the action to be broadcast live and in high-definition on ITV4.

“It’s brilliant to see my i30N up close ‘in the flesh’ finally, and I have to say, I think the livery looks absolutely awesome on the Hyundai – really cool. It’s obviously quite a recognisable design now, but it’s on a completely different car and I love the fact that it looks like it’s moving even when it’s standing still.

“I’m hugely fortunate to benefit from the continued support of both Ginsters and Hansford Sensors – particularly in the current climate. They are the most amazing partners who have always fully immersed themselves in this incredible journey we are on, and knowing I have them cheering me on every time I take to the track is tremendous motivation.

“This is a really exciting time for me, and I’ve settled into the team very well. Naturally, I knew quite a few of the guys and girls already simply through being in the paddock over the years and via the coaching and instructing I have done with some of EXCELR8’s junior drivers. My engineer ‘Spenny’ and I have been welcomed with open arms and made to feel at home straightaway – it honestly feels like we’ve been here for years.

“I’m really enjoying the new environment and relishing the fresh challenge ahead – I’ve got a spring back in my step, and I’m fired-up to repay the faith shown in me by the team and my loyal partners. Our pre-season aim is very simply to make the Hyundai as quick as possible to be able to achieve the results everybody deserves right from the first qualifying session.

“I can see the potential in both the team and the car, and I’m really looking forward to unlocking it. I had a small taste of the i30N at Snetterton last month, where I was able to establish a good baseline and understanding, and now I’m eager to gauge where we are against our competitors. I can’t wait to climb behind the wheel of my car for the first time, evaluate the 2021 upgrades, work closely with my three team-mates – and get properly down to business!”

“We’re delighted to take the covers off Tom’s Ginsters EXCELR8 with TradePriceCars.com Hyundai. Our expansion from two cars to four over the off-season has understandably required a monumental effort from every single member of the team, with no shortage of midnight oil burned back at base. Seeing the i30N looking so striking in its new colour scheme is just reward for everybody’s hard work, and we genuinely couldn’t be happier with the way it has turned out.

“Ginsters and Hansford Sensors have been integral partners to Tom over the course of his flourishing career, and that sense of loyalty and commitment is something that we value highly here – not to mention the very bedrock of sustained success in a series as ultra-competitive as the BTCC. It is an honour to welcome them to the team, and we look forward to flying the flag for them and putting both brands right at the forefront of the action during the upcoming campaign.”

“2021 marks our third season supporting Tom in the BTCC, and the beginning of a new era as he joins Ginsters EXCELR8 with TradePriceCars.com. He is unquestionably one of the leading stars of the series and a champion in-waiting, and we are immensely proud to be accompanying him again on his quest for the title. Not only is he a top-drawer racing driver, but he is also a first-rate brand ambassador with an ever-increasing fan following.

“Our partnership with Tom over the past two years has allowed us to introduce BTCC race-goers all around the country to our tempting range of delicious, award-winning pasties, slices and rolls and that unmistakable flavour. Fans can always rely on Ginsters for a quick and easy meal throughout an action-packed race day.

“We’re all hugely excited to see the distinctive Ginsters-liveried Hyundai i30N doing battle for glory out on the circuit over the coming months, as we have no doubt it will…”

“Ten years ago, we spotted something special in Tom, as a driver and – more importantly – as a person. Being a keen motorsport fan, I have always kept a close eye on the racing scene and whilst he was still climbing the ladder back then, Tom immediately stood out, both for his performances and results behind the wheel as well as his approach and demeanour outside of the car.

“As an ambitious, locally-born young driver clearly going places in the sport, he was the perfect fit for our company. Fast forward ten years, and Tom has firmly established himself as a member of the wider Hansford Sensors family. Our team regularly tune in to watch him compete and there is a real buzz about the office every time he has a good weekend – which is most weekends, to be fair.

“Tom is an impeccable brand ambassador and a truly first-class racing driver, but above all else, he has become a close friend and, as he likes to say himself, there’s nothing better than going racing with your mates. We look forward to joining him as he begins the next phase of his career at Ginsters EXCELR8 with TradePriceCars.com in 2021 – and to another season of on and off-track success.”