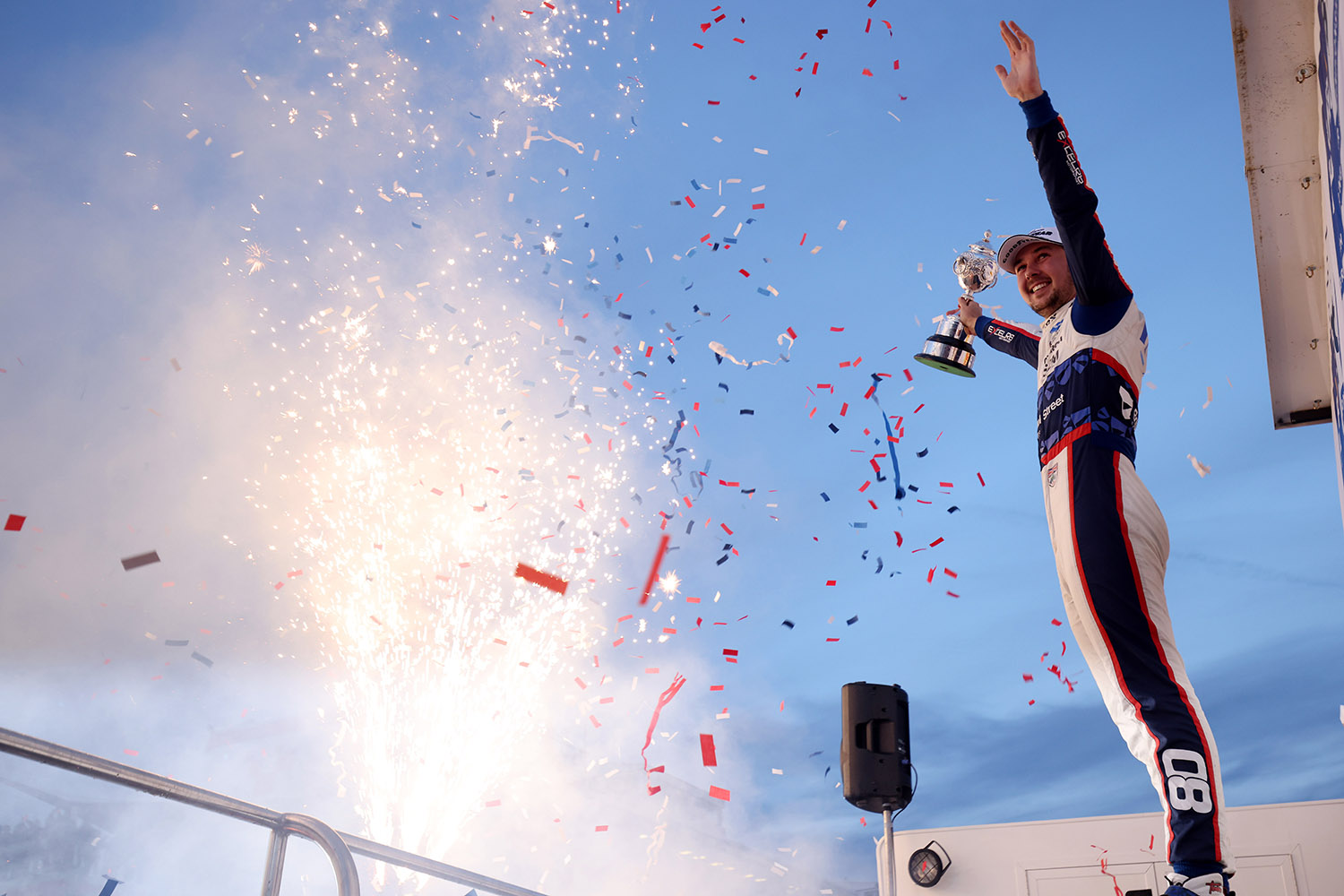 Ingram entered the event sitting third in the standings, seven points adrift of the top of the table. History was not on his side, with no driver lower than second going into the season finale having ever lifted the laurels in the championship’s modern era. By the end of the weekend, history had been re-written.

Behind the wheel of his Hyundai i30N, the Bristol Street Motors with EXCELR8 TradePriceCars.com star produced what he described as the ‘lap of his life’ in qualifying – a staggering four tenths-of-a-second quicker than anybody else could muster – to secure pole position amongst the 29 high-calibre contenders around the Kent circuit’s legendary ‘GP’ loop.

In front of the live ITV4 television cameras and a capacity trackside crowd the next day, Ingram then converted that into a lights-to-flag victory in the curtain-raising contest, keeping the pursuing Rory Butcher at bay throughout to turn his seven-point deficit into a three-point championship lead.

The talented Bucks-born ace repeated the result in race two for a 25th career win – elevating him to 14th on the all-time list – but this one was an altogether tougher proposition. For lap after lap, he had title rival Jake Hill breathing down his neck, meaning he could not afford to stray so much as an inch off-line and forcing him to box clever with his hybrid deployment. While Hill used up all of his before the last lap, Ingram wisely saved one final boost to earn himself some breathing space – and it paid off handsomely.

From tenth on the partially-reversed grid for the decider – with chief competitors Hill and Ash Sutton just ahead in ninth and sixth – the 29-year-old went immediately on the offensive. After getting the better of some early dices, he narrowly avoided disaster when two cars collided directly in front of him at Druids on lap 11, prior to pinching fifth from Hill with an opportunistic dive into Paddock Hill Bend heading onto the last lap.

It was a champion’s drive if ever there was one, and it was more than enough to get the job done. When he crossed the line, the emotions overflowed, as Ingram added the overall BTCC Drivers’ trophy to the two BTCC Independents’ titles and three Ginetta championships he had already won. Once the final chequered flag had fallen, a total of six triumphs in 2022 – the highest in the field – and six further podium finishes bore testament to a truly outstanding campaign.

“I can’t believe it – this is a lifelong dream come true. I’ve been thinking about this moment for literally my entire life. The BTCC is what I always wanted to do. It’s what I always wanted to win. I’ve had a few years of coming into the finale with a chance and it not quite working out, so I honestly can’t put into words what this means and what an incredible feeling it is.

“I felt so relaxed going into the weekend, really chilled and actually more excited than anything else. I also knew I would need to attack – this was not the time to be ‘pointsy’ – and in all my years of driving around in circles, I’ve maybe only once before had a car as good as the Hyundai was at Brands Hatch. For that to come at the moment when we needed it the most was just amazing, but even so, in qualifying, all we did was submit our CV for someone to take a look at – we still had to pass the job interview.

“I breathed a big sigh of relief after the first race, because if that one goes wrong, you’re on the back foot for the rest of the day so I was very happy to get it safely out of the way. I went into race two targeting a ‘rinse and repeat’ but it was hard work, because we didn’t have the pace against Jake [Hill] so I knew we had to try to beat him on hybrid deployment instead, which we managed to do.

“The last one was then so difficult; there was so much going on and a few heart-in-mouth moments – I was millimetres away from being wiped out at Druids. We knew all the maths and various permutations and my engineer, Spencer, was constantly on the radio keeping me updated on everything, but I still felt like I needed an adult in the passenger seat to hold my hand and say, ‘it’s ok, just chill, it will all be fine’!

“I saved my hybrid and over the last few laps, I thought, ‘I quite fancy having a little nibble’ so when I saw Jake leave a gap into Paddock, I figured I might as well stick my nose into it. I don’t like sitting still – that’s not my style. I wanted to win the championship properly, and sometimes, you’ve just got to go for it.

“I said at the start of the weekend that after coming so close on so many occasions, I really didn’t want to be the bridesmaid anymore and it’s insane to think we’ve finally done it. I’ve got an absolutely fantastic team around me at Bristol Street Motors with EXCELR8 TradePriceCars.com – they’ve worked tirelessly all year to make this happen, and this title is as much theirs as it is mine.

“I honestly cannot thank every single person who has helped me along this journey enough. I fell in love with the BTCC when I was just five-years-old, and when you’ve devoted your whole life to something, as my family and I have done… I simply don’t have the words. This isn’t going to sink in for quite some time.”