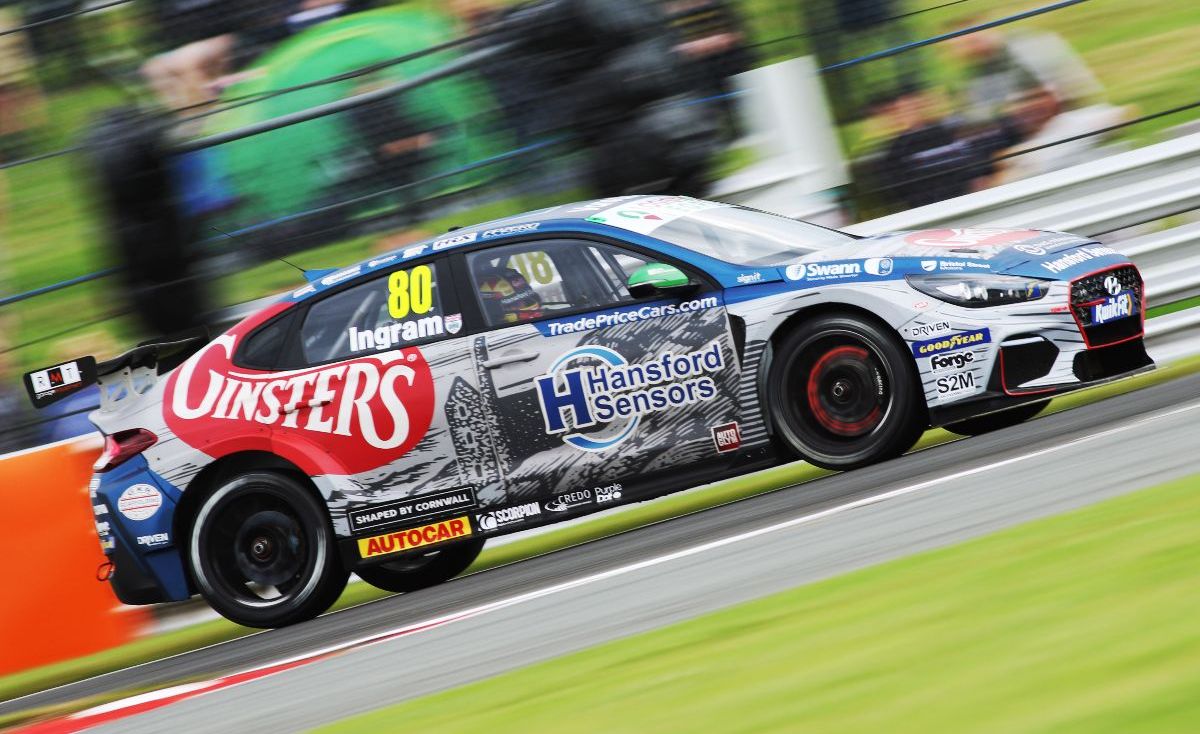 Oulton Park – scene of the fourth outing on the 2021 British Touring Car Championship calendar last weekend (31 July – 1 August) – has been likened by some to a rollercoaster ride, and Tom Ingram certainly experienced its highs and lows as he unleashed a scintillating turn-of-speed but was ultimately unrewarded for his stellar efforts.

Arriving at Oulton sitting second in the standings in the UK’s premier motor racing series, Ingram knew he would face an uphill struggle around the undulating Cheshire circuit with 66kg of success ballast aboard his Hyundai i30 Fastback N Performance, but a turbo wastegate issue in qualifying made his task doubly difficult as it consigned him to the rear of the high-calibre, 28-strong grid for the curtain-raising contest.

Undeterred, the talented young Bucks-born ace put on a spectacular display in front of the live ITV4 television cameras and – for the first time in almost two years – a full trackside crowd, as he thrilled fans with his famed overtaking prowess.

Belying the difficulty of passing at Oulton, the weight he was carrying and the disadvantage of running on the less favourable medium-compound Goodyear rubber, he gained seven spots on the opening lap alone and was on the cusp of the points when the race was red-flagged for an accident halfway through. Unfortunately, with his tyres and brakes by then past their best, he struggled to maintain position at the re-start and wound up a frustrated 19th.

With the ballast removed for race two, however, Ingram went immediately on the offensive, posting the fastest lap for an extra point as he scythed his way determinedly into the top ten by mid-distance. Rapidly zeroing in on a multi-car scrap for fifth in the closing stages, he narrowly ran out of time to launch an attack – the quarter-of-a-second separating him from ninth place at the chequered flag costing him pole position on the partially-reversed grid for race three.

Still, with the benefit of the soft tyres, when the lights went out in the day’s finale, the Ginsters EXCELR8 with TradePriceCars.com star hooked his Hyundai up beautifully away from the line to climb to sixth within just a handful of corners, before the action was halted due to an accident at the tail-end of the field.

At the re-start, Ingram again made up ground up to eighth, and with his chief title rival Ash Sutton – the sole other driver inside the top ten on the grid on the soft rubber – retiring due to contact, a golden opportunity looked to have presented itself to snatch the championship lead, but then the 27-year-old’s Oulton Park curse struck once more…

Having had to jink off-track to avoid the wayward Sutton on the run down the Avenue, Ingram was forced to pit to get grass removed from the radiator of his i30N. Rejoining the fray almost half-a-minute behind the pack, all that was left to fight for was fastest lap, which he duly delivered, almost four tenths-of-a-second quicker than any of his adversaries could muster.

While it was a weekend of ‘what might have been’ for the two-time BTCC Independents’ Champion, Sutton’s dramas at least meant he only conceded two points at the top of the Drivers’ table, retaining second position heading next to Knockhill in Scotland in just under a fortnight’s time (14-15 August). Ginsters EXCELR8 with TradePriceCars.com occupies fourth spot in the Teams’ classification.

“I don’t quite know what I’ve done to upset Oulton Park, but it clearly doesn’t like me very much as things never go to plan there! Saturday was obviously a difficult and disappointing day for us; the Ginsters EXCELR8 with TradePriceCars.com guys worked their socks off both during and after qualifying – they’ve got the burns on their arms and legs from the heat to prove it – but it was a herculean task and there just wasn’t enough time to rectify the problem before the end of the session.

“Oulton is probably the worst circuit on the calendar at which to carry weight due to its stop-start nature, so it would have been tough to get too far up the grid in any case, but I reckon we would have been shooting for a position just outside the top ten.

“Still, we stayed level-headed and did what we needed to do on race day to claw our way up the order and haul ourselves into the mix. It’s so difficult to make progress with that much ballast on-board, and when you’re starting from the back like we were, you can’t think about the end of the race – your entire focus is on making up places whenever and wherever you can.

“That meant that by the time the re-start came around in race one, I had practically no brakes or tyres left, which combined with the weight made me a sitting duck in the final laps – we were simply in survival mode by that stage.

“With the weight removed, the Hyundai came alive and felt fantastic in races two and three, but it would have been so much nicer to be able to show that pace at the front of the field. After rising to sixth at the start of race three and with virtually no ballast, I felt like we were in a really good place but then of course the red flags came out and we had to do it all over again – and we know how that turned out…

“Once I’d set fastest lap, I backed off to look after the tyres in case there was a safety car that would have allowed us to try to regain some ground, but when it did come it was too late to make much difference and it was immediately followed by a red flag anyway, which kind of summed up our weekend.

“Remaining positive, though, whilst the other drivers have closed in on us in the standings, we are still there, we are still in second position and to achieve fastest lap on both tyre compounds was really encouraging and shows the speed we’ve got in this car.

“Yes, we might very well have been leading the championship now had things gone differently, but by the same token, at least Ash [Sutton] didn’t score many points either so it could definitely have been worse and at the end of the day, it’s important to put all of this into perspective. What happened to us pales into complete insignificance compared to the events at Brands Hatch, and above and beyond anything else, my thoughts go out to everybody affected by that tragedy and the family and friends of the marshal involved.”