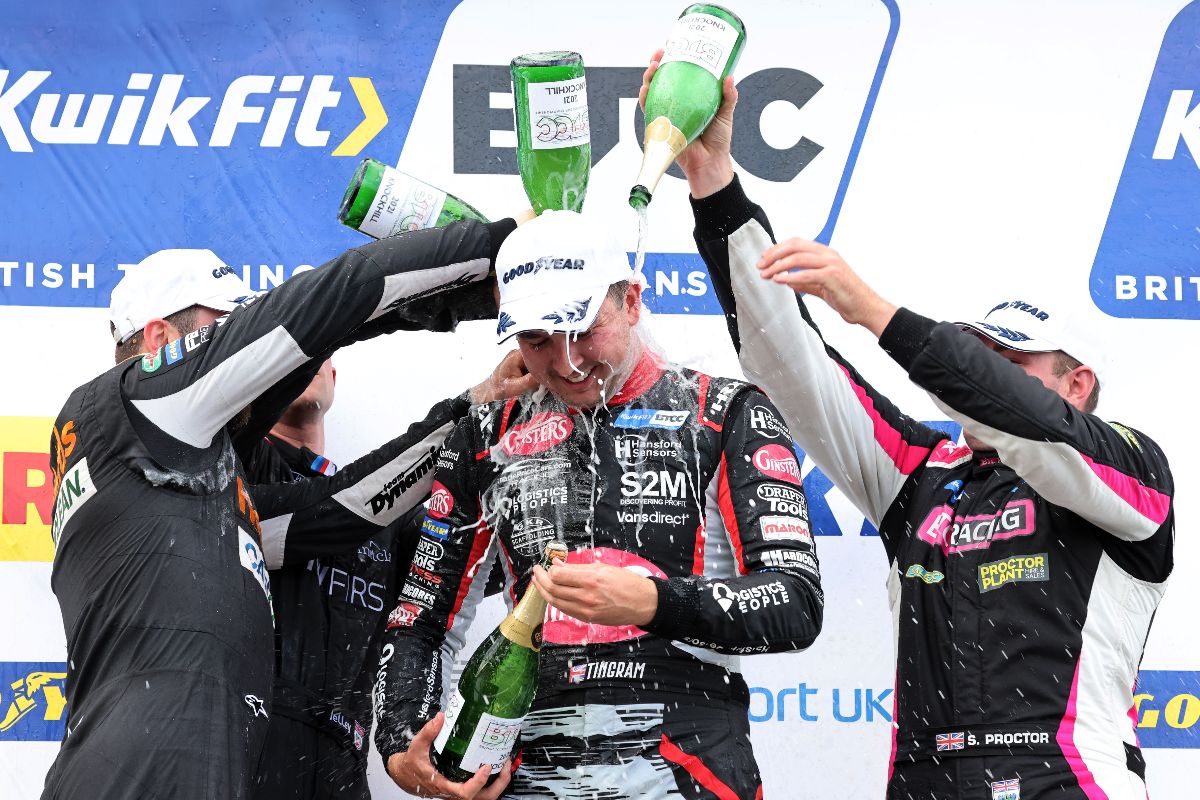 Tom Ingram played his cards to perfection in the latest outing of the British Touring Car Championship at Knockhill in Scotland last weekend (14/15 August), pulling off what former champion Tim Harvey described as the ‘move of the season’ to fight his way to a brilliant third victory of 2021.

Ingram knew heading to Knockhill that he would be on the back foot somewhat, carrying 66kg of success ballast aboard his Ginsters EXCELR8 with TradePriceCars.com Hyundai i30N to a track that has traditionally favoured rear wheel-drive machinery.

In a red flag-punctuated qualifying session around the undulating Fife circuit, the talented young Bucks-born ace dug deep, producing a gritty effort to haul himself up the order in the closing stages into ninth amongst the 29 high-calibre contenders, a scant 0.075s adrift of the top three.

Electing to take all the pain in one go in Sunday’s opening contest, Ingram bolted on the less favourable medium-compound tyres – which all competitors had to use once – and notwithstanding a bright start that saw him gain a spot to eighth, his handicap soon began to tell, as a train of cars crawled all over the back of the Hyundai during the second half of the race.

Facing a rearguard battle, the 27-year-old defended superbly under intense pressure to concede only a couple of positions and hold on to a top ten finish, and after removing most of the ballast and switching onto the softer Goodyear rubber, an ultra-committed performance in race two yielded sixth at the chequered flag following a number of hard-fought wheel-to-wheel duels.

That left Ingram fourth on the partially-reversed grid for the day’s finale, and in front of the live ITV4 television cameras, he immediately went on the attack. Having relieved Senna Proctor of third at McIntyres on lap one, he set about chasing down double champion Jason Plato and Stephen Jelley ahead.

After exploiting an error by the former to squeeze through into second, the two-time BTCC Independents’ title-winner turned his attentions to Jelley, moving to the outside approaching the hairpin on lap 17 to lull his rival into a false sense of security, before changing direction at the last possible moment and diving to the inside to sensationally snatch the lead.

It was a millimetre-perfect pass that laid the foundations for Ingram’s 19th career triumph in the UK’s premier motor racing series – a result that keeps him solidly in the hunt for the coveted Drivers’ crown, just 14 points adrift of the summit of the standings in second place at the midway stage of the campaign.

“That was what we tried to do at Oulton Park, but obviously it worked out a bit better this time! I’m so happy, and it was even more satisfying to achieve it around a circuit like Knockhill, with the adrenaline pumping after having to really fight for it and in front of so many fans.

“We knew it was going to be tough going into the weekend. Knockhill is probably the hardest circuit on the calendar for carrying weight in a front wheel-drive car, with the long drag uphill out of the final hairpin onto the start/finish straight, and given the field is always so close round there, just a small loss of time can cost you a lot of positions. With that in mind, I was relatively pleased to line up ninth in qualifying, and we went into race day with our minds firmly focussed on playing the long game.

“Our strategy was to get the weight and medium tyres out of the way early on while trying to hold station, before switching to the soft tyres and pushing forward to put ourselves in contention for a reversed grid slot for race three.

“Race one was a struggle, but we knew we had to be patient and I simply tried to keep my head down and stay out of trouble. That was easier said than done in race two, which got really lively at times – everyone seemed to be filling gaps, even when they weren’t there and although we had good pace, we couldn’t really show it due to all the battling going on! There were certainly some ambitious moves being pulled, but nonetheless, we scored solid points in both races.

“I’ve got to say, the Hyundai felt phenomenal in race three – the best car I’ve ever driven around Knockhill. My engineer ‘Spenny’ and the whole EXCELR8 team are doing an amazing job with the i30N, and it just did everything I wanted it to do. I managed to catch Proctor napping at the start, and then Jason [Plato] did all the hard work for me when he ran wide a few laps later.

“I could see I was a little bit better than Stephen [Jelley] on the brakes into the hairpin so I spent a few laps trying to suss out my best option, knowing I would probably only get one shot at him. I’d been lining the move up for a few laps building up to it, and when the opportunity arose, I didn’t need a second invitation. I was well-chuffed with that!

“It was awesome to take our third victory of the season, although it wasn’t all plain sailing. We had a few electrical gremlins in the car, which meant I had to lift off the throttle each time I changed gear – and you change gear quite frequently at Knockhill! We also had a slight misfire, which cost us some straight-line speed, and the dashboard kept lighting up like a Christmas tree with alarms constantly telling me I had either high or low fuel pressure – I genuinely wasn’t sure we would finish the race.

“Still, we made it and it was great to finish the weekend on a high. After the points we haemorrhaged at Oulton Park, it was critical to score well at Knockhill and to come to a rear wheel-drive track with a lot of weight on-board, win a race and stay second overall, yeah, I’ll definitely take that. Better still, our toughest circuits are now theoretically out of the way, so hopefully we can knuckle down from here and really crack on!”