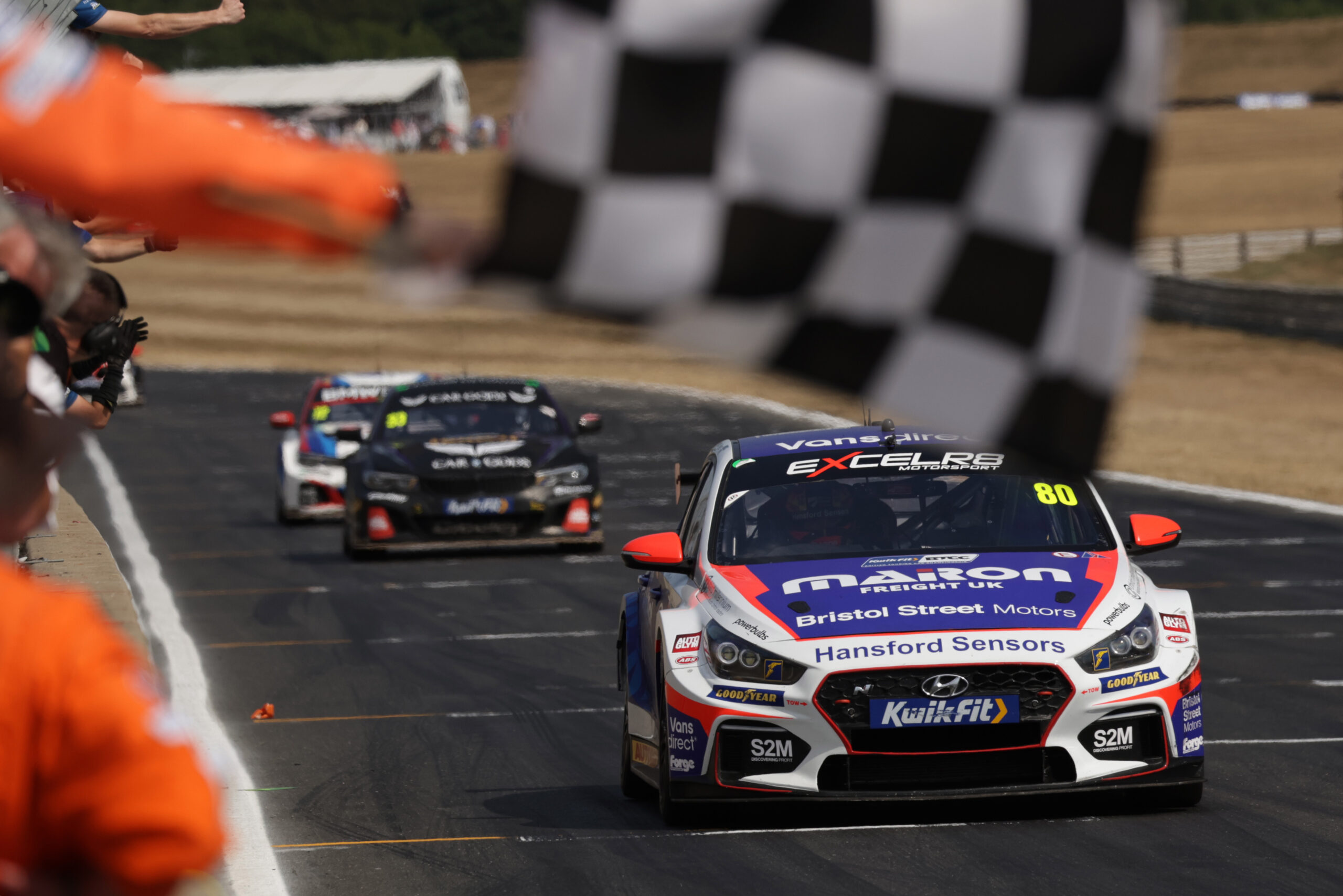 On a weekend of rear wheel-drive dominance, Tom Ingram led the front wheel-drive charge in the British Touring Car Championship at Snetterton (13/14 August), as he tallied a trio of hard-fought top three finishes to keep his challenge for the crown firmly on-track.

The qualifying lap record-holder at Snetterton – the longest circuit on the BTCC calendar at just shy of three miles – Ingram was right on the money from the outset once more behind the wheel of his Bristol Street Motors with EXCELR8 TradePriceCars.com Hyundai i30N.

After setting the pace in the opening free practice session in the UK’s premier motor racing series, the talented Bucks-born ace backed that form up with the second-quickest time in FP2. In sweltering conditions in qualifying, he then secured third on the grid amongst the 29 high-calibre protagonists – the sole front wheel-drive car inside the top five.

His second position in the championship meant Ingram had only three laps of hybrid ‘boost’ available to him in race one, but in front of the live ITV4 television cameras and a capacity trackside crowd, he nonetheless went on the offensive against Colin Turkington and Jake Hill ahead in the early laps.

Once the BMW pair settled into their stride and inevitably pulled away, he switched his focus to staving off the similar cars of Adam Morgan and Stephen Jelley behind – both with significantly more hybrid power at their disposal – which he successfully did right the way to the chequered flag.

It was much the same story in race two. With echoes of the Donington Park season curtain-raiser, the 28-year-old had a grandstand view as Turkington and Hill duelled wheel-to-wheel on the first lap, but try as he might – and he certainly did, drawing half-alongside on a number of occasions – he couldn’t quite capitalise.

Taking care to look after his tyres in the intense heat while holding back the little hybrid deployment he had should he need to use it to defend, Ingram again found himself with his hands full as Morgan’s marauding BMW loomed ever-larger in his mirrors over the closing stages. A second consecutive podium finish was just reward for a faultless drive under intense pressure – with 1990 champion Robb Gravett hailing it a ‘fantastic’ performance.

From seventh on the grid for the day’s finale, the two-time BTCC Independents’ Champion immediately set about making up ground. After swiftly despatching Morgan and Jelley, he latched onto the back of the third-place tussle between Dan Rowbottom and Ricky Collard, opportunistically following the Toyota past the Honda at the Bomb Hole on lap five.

Headlights ablaze, he subsequently turned his attentions to relieving Collard of third, which he did with a neat undercut exiting Agostini on the last lap. His rival robustly forced his way back ahead at the next corner, but a judicial review reversed the positions, making Ingram the only driver to finish inside the top three in every race of the day.

The result consolidated the Hyundai star’s second place in the championship standings, 15 points adrift of quadruple title-winner Turkington with nine races left to run, beginning at Thruxton in just under a fortnight’s time (28/29 August).

“I think we did the best job possible over the weekend, to be honest. I don’t really feel we could have expected much more given the pace of the rear wheel-drive cars. The BMWs were incredibly fast again – so much so that Adam [Morgan] ran into the back of me at one stage purely from the extra cornering speed he was able to carry! We tried to take the fight to them, but being realistic, it was never really on so we unfortunately had to admit defeat and simply focus on our own game.

“I’ve got to say, the Hyundai felt fantastic throughout and we were well-placed in third on the grid – but whereas normally, the first few laps are our best opportunity to attack the rear wheel-drive guys while they bring their front tyres up to temperature, when it’s as hot as it was, that opportunity disappears so we knew we were going to be on the back foot.

“With that in mind, I was aiming for what I would call a ‘pointsy’ day, and that’s exactly what we achieved. It was fairly heavy-going in race one, especially having to keep checking in my mirrors, but it was good to finish on the podium and then race two was virtually copy-and-paste. We clearly didn’t have the pace to match the BMWs, but we won ‘Class B’ again. Obviously we want to be winning ‘Class A’ as well, but that’s pretty difficult at the moment.

“I was pleased to claw back some points on Colin [Turkington] in race three at least, and we’re still very much in the hunt with some circuits coming up that should definitely play to our strengths. The whole team has worked so hard and the car just feels phenomenal – I really can’t ask for it to do any more than it’s currently doing. We’re right up at the sharp end weekend-in, weekend-out and scoring consistently well, so this isn’t over by any means…”